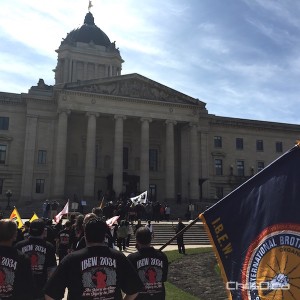 Workers walk to the Manitoba Legislative Building as part of the national Day of Mourning on Tuesday, April 28, 2015. (JULY MILOSEVIC / FOR CHRISD.CA)

WINNIPEG — Hundreds joined in a walk down Broadway Tuesday to mark the national Day of Mourning, honouring the lives of Manitobans lost to workplace incidents.

Premier Greg Selinger joined in the annual SAFE Workers of Tomorrow Leaders’ Walk, which began at Union Centre and concluded at the Manitoba Legislative Building. The theme for the event was New and Vulnerable Workers.

“In 2014, we lost 13 workers to acute hazards in our province and another 13 workers to occupational illnesses,” said Minister of Labour and Immigration Erna Braun. “Today’s Day of Mourning reminds us that an injury to one is truly an injury to us all, and our work as a province is not done until we get each and every worker home safe at the end of the workday.”

Flags at provincial government buildings and the WCB building were lowered to half-mast to acknowledge this important day, as well as at Winnipeg’s City Hall on Main Street.