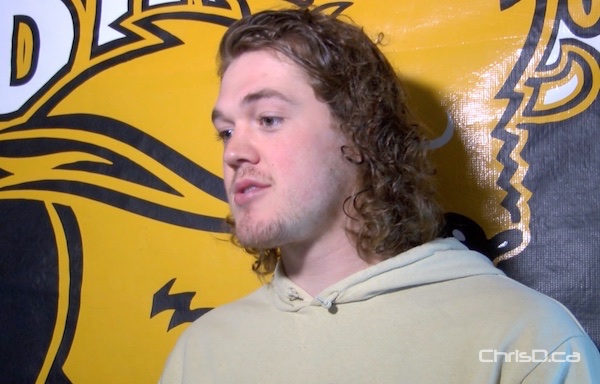 WINNIPEG — The Manitoba Bisons have invited 115 players to their annual three-day spring camp this week.

It’s a chance for football head coach Brian Dobie and his staff to evaluate young talent right here in Manitoba and from across Canada.

The Bisons look to fill a void this season left by quarterback Jordan Yantz, who completed his fifth year of eligibility in 2014, and the possibility of fourth-year slotback Nic Demski being drafted to the CFL this spring as a top prospect.

Quarterback Theo Deezar, who got his first start last season, has impressed Dobie and appears to be the frontrunner.

“I know he’s chomping at the bit for his opportunity,” Dobie said. “He’s going to be pushed by a couple of other players. Ashton MacKinnon was a major recruit for us — he’s just under 6’7”, he’s an athlete, he’s got a gun for an arm. Foster Martens is another incumbent, but we’ll press Theo.”

Deezar says if he’s making his reads and throws a little bit faster than the next guy, that will set him apart from the rest, but for now he won’t change much.

“I’ve just got to keep my head down and keep working. If I think I’m the starter before I am the starter, it’s very easy to either lose the spot or to lose focus on what’s best for the team,” the 6’5″ St. Paul’s High School graduate said.

The Bisons finished last season by advancing to the CIS Semi-Final Bowl game for the first time since winning the Vanier Cup in 2007. Manitoba finished in the top four spot in the country.

Spring camp begins Thursday with team and positional meetings at Investors Group Field, before practice at the U of M turf fields until Sunday, May 3.