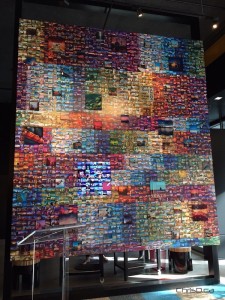 A mural made up of photographs from Winnipeg artist Bryan Scott in the lobby of the Alt Hotel on Thursday, April 30, 2015. (CHRISD.CA)

WINNIPEG — The newest hotel to be constructed in the heart of the city’s downtown is open for business.

Alt Hotel on Donald Street held its official opening Thursday after a two-week dry run with guests. The 160-room property is the latest offering by Canadian hotelier Group Germain Hotels.

“Our connection to Winnipeg and its people has grown incredibly since we started bringing the Alt experience to Manitoba,” said Christiane Germain, the company’s co-president. “The people we’ve met in Winnipeg are exceptionally dynamic and enthusiastic.”

The Alt Hotel boasts modern and contemporary rooms with available banquet and meeting space from floors eight to 19. iQmetrix and Stantec will occupy the first few floors.

The hotel is one part of the massive $100 million Centrepoint development across from MTS Centre, that when completed, will include condos, a parkade, coffee shop and two restaurants. The development is a partnership between Longboat Development and Artis Reit.

A new restaurant by entrepreneur Bobby Mottola (Pizzeria Gusto) will open north of the hotel shortly. The Merchant Kitchen and Bar will specialize in Latin and Asian food and be connected to Alt. A snack bar called Altcetera is already available in the lobby to provide a quick hunger fix.

Guests who are checking out on a Sunday can also stay in bed longer than at most other chains. Alt has a no-frills policy on Sunday, allowing visitors to stay for the entire day up until midnight before they leave.

Group Germain Hotels plans to open additional properties in Ottawa and Calgary by 2017.