Manitoba’s Tax Hike on Banks a ‘Smash and Grab’: Currie 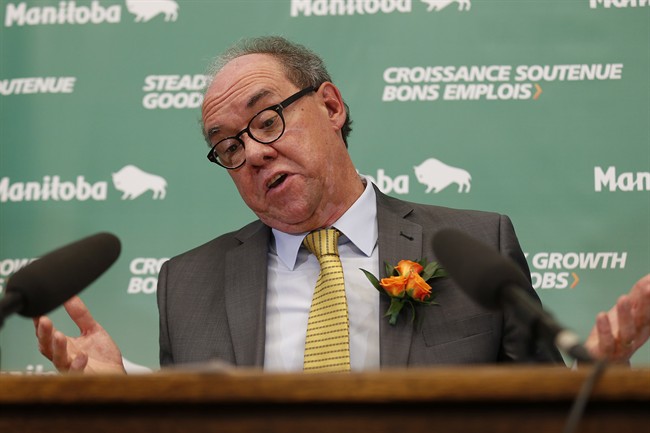 Manitoba Finance Minister Greg Dewar and the Manitoba NDP party speaks about it’s 2015 budget for the province at the Manitoba Legislature in Winnipeg, Thursday, April 30, 2015. (THE CANADIAN PRESS/John Woods)

WINNIPEG — There’s an old joke that begins with the question, “Why do people rob banks?” The answer, “Because that’s where the money is!”

Manitoba’s NDP government, which is well past its best before date, brought down a budget on Thursday. It was pretty routine for the most part — lots of spending that will result in a deficit of more than $400 million, some goodies for seniors to help them pay their property tax, etc. Nothing hugely unusual, except when it comes to banks.

Greg Selinger and company are hiking the capital tax on banks, trust companies and finance companies from five percent to six percent. The estimated take from this little stick up is expected to be $25 million. Why are they doing this? Because they need money wherever they can find it, and no one who might vote NDP is likely to object. In other words, the reason is, because they can.

The capital tax that banks pay in Manitoba is already the highest in Canada I’m told, but until it was included in this budget, I doubt that one person in a hundred could have told you that this tax even existed. Needless to say, banks are an easy target. They report profits in the billions of dollars, and still they want more.

Just this week we learned that the country’s largest chartered bank, Royal Bank of Canada, is getting ready to charge customers an additional fee when they make their monthly payments on loans and mortgages. Apparently everyone will be hit with a charge of $2 to $5, regardless of whether you are seven or 70. The mind truly reels at the suits that must have dreamed that one up.

Meanwhile, are RBC and the other banks likely to threaten to stop doing business in Manitoba because of Selinger’s latest tax increase? Not a chance.

Stephen Leacock, where are you?