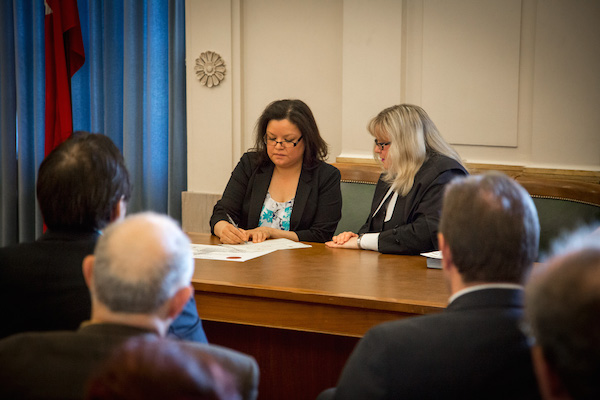 The Pas MLA Amanda Lathlin takes the oath of office at the Manitoba Legislative Building on Monday, May 4, 2015. (HANDOUT)

WINNIPEG — Manitoba’s newest NDP MLA was sworn in Monday after a by-election on April 21.

Amanda Lathlin, the first First Nations woman to serve in the Manitoba Legislative Assembly, will represent The Pas.

Lathlin has served as the University College of the North’s Representative Workforce Coordinator and holds a Bachelor of Arts in Native Studies and Political Studies from the University of Manitoba. She is a mother and a former band councillor, in addition to being an active volunteer in her community.

Lathlin is the daughter of the late Oscar Lathlin, who served as the elected member for The Pas from 1990 to 2008.