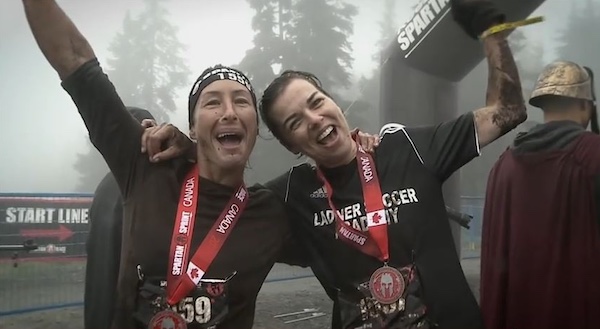 The ‘ultimate human sport’ is heading to southeastern Manitoba this summer and the team organizing it is hell-bent on getting you into the first ever Spartan Race event held in Manitoba.

The Spartan Sprint is slated for July 11 in Grunthal. The Sprint (three-plus miles) is a beginner level event, and is a part of the trifecta along with the Super (eight-plus miles) and the Beast (12-plus-miles).

What grew out of the Vermont backcountry has turned into a worldwide phenomenon, with 130 events in 15 countries and six continents in 2014 alone. And while the word ‘Spartan’ and ‘race’ might elicit visions of madness, Jesse Cox, one of the organizers for the Manitoba event, says there’s something for everyone.

“What we want to do is get those people who are thinking, ‘Aw, man, that would be awesome to do but it looks difficult,’” Cox said. “Look, your jumping through fire, crawling under barbed wire. That’s an awesome story to tell someone at the end of the day.”

Cox says Grunthal was chosen due to its size after looking at other locations in Spruce Woods and Bird’s Hill Provincial Park.

“We wanted to create something new, different and, of course, challenging.”

Spartan Races set themselves apart from others, such as the Dirty Donkey Mud Run and the Tough Mudder, by being the premier obstacle course racing (OCR) series in the world, according to Cox.

“We’re the first one that is world-wide, from Canada to the United States to Europe — we are all over the place,” he said. “Spartan Race is also the only OCR company to start a training program called Spartan SGX that actually trains athletes, more on the professional and serious side of racing.”

But, as Cox puts it, the Spartan Race is all about the community that it has created.

“People become family,” he said. “There’s races for men, women and children. Everyone becomes great friends. It becomes a group thing and a family thing very quickly. The environment it creates is the best thing about Spartan Race.”

And if that wasn’t enough, the brass who run Spartan Race, led by founder Joe De Sena, are in talks with the Olympic Committee to get the sport into the world’s foremost sporting competition.

They also offer a guide with workouts, nutrition tips and other advice to get prepared through a downloadable e-book (PDF).

Interested in being a Spartan? You can register at SpartanRace.ca.