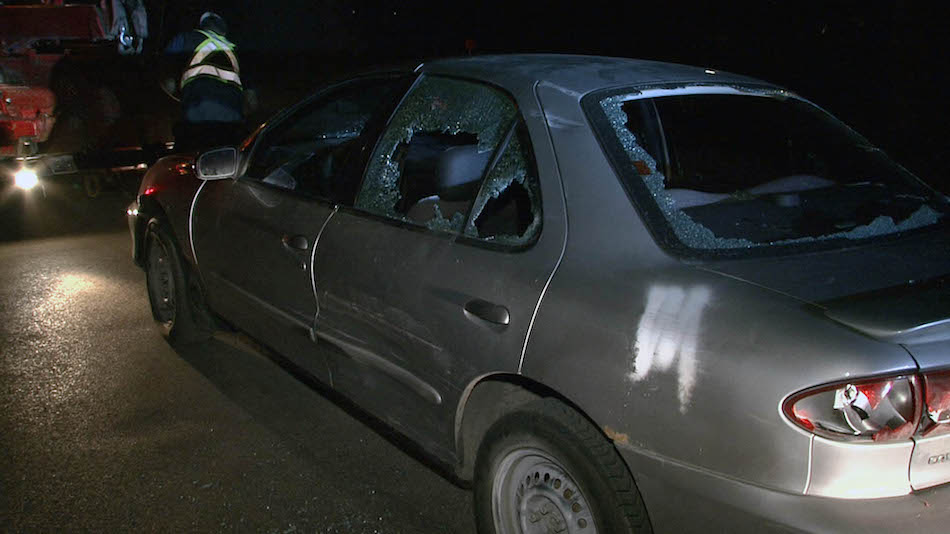 A damaged Chevrolet Cavalier after the driver allegedly tried to mow down pedestrians in two Charleswood parks on Tuesday, May 5, 2015. (SHAUN MCLEOD / FOR CHRISD.CA) 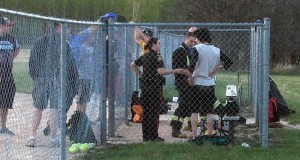 Police speak with witnesses at a baseball diamond in Charleswood on Tuesday night. (SHAUN MCLEOD / FOR CHRISD.CA)

Police have arrested a 21-year-old man who allegedly tried to run over several people in two Winnipeg parks on Tuesday night.

A silver Chevrolet Cavalier sedan was shown in a Facebook video driving through a skateboard park and baseball diamond at Marj Edey Park near Fairmont Road and Ridgewood Avenue. Earlier in the evening, police were also called to Pacific Junction Elementary School on Cathcart Street for a report of a vehicle driving on the school’s fields and doing donuts.

A 25-year-old man was struck by the vehicle during the incidents and is listed in stable condition.

“Instead of going under the vehicle potentially, he went up and over onto the hood or windshield, and was actually able to land on his feet,” said Const. Jason Michalyshen of the Winnipeg Police Service. “He was very, very fortunate. We could certainly be talking about something very different here.”

The suspect fled eastbound on Wilkes Avenue and narrowly missed an on-coming train in the area. A male passenger who had previously jumped into the vehicle got out a short time later fearing for his safety.

The car was ditched and the driver fled somewhere into the Assiniboine Forest before police caught up with him Wednesday morning.

“It certainly is no laughing matter but it is just so bizarre,” Michalyshen said. “It’s not something you see every day

Unreal day!! Just at Michael komendes skatepark & so asshole decides to put everybody at risk, he ended up hitting…