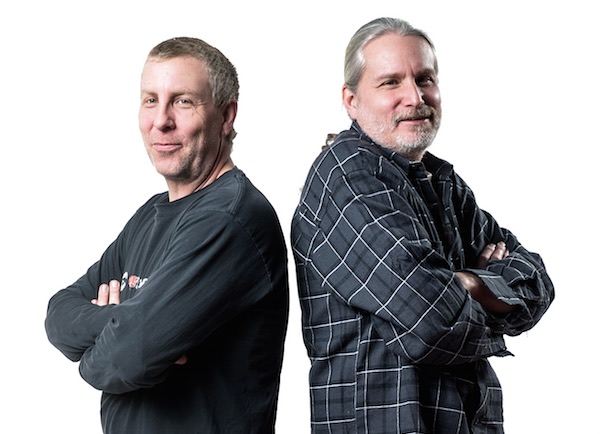 Joe and Mike Wolchock — The Neon Brothers — star in HGTV’s “Buy It, Fix It, Sell It.” (HANDOUT)

WINNIPEG — Turning trash into treasure is somewhat of an art form, but the new season of a HGTV reality show will tackle that head-on with some expert help.

Produced by Canadian film company Frantic Films, “Buy It, Fix It, Sell It” follows a cast of refurbishing professionals bidding on second-hand items at auctions in Winnipeg and Toronto, only to turn them into designer or collector items and sell them to see who can make the biggest profit.

Mike Wolchock, and his brother Joe, are known as the Neon Brothers on the show. They own The Neon Factory, a neon sign shop in Winnipeg.

Wolchock said he is looking forward to the premiere of the new season because he has yet to see what the rest of the cast did with their auctions buys.

“The pieces, I think, are better this [season]. Judging by what we did, I think people are going to really like what’s going on with the show,” said Wolchock in a phone interview.

According to Wolchock, the Neon Bros. have always flipped second-hand stuff for fun. Wolchock said he collects vintage advertising, but can transform almost anything.

“Joe and I think nothing of getting in the truck, driving out to Saskatchewan and raiding old buildings just for fun,” said Wolchock.

“I feel like they pay us to do what we regularly do in life.”

He said the most imaginative flip was turning a table into a headboard in the new season. Wolchock said he thinks the characters are the best part of the show.

“I think the best stuff we did this year was because we were kind of getting along, but torqueing each other at the same time.”

Wolchock said working with his brother is an advantage on the show.

“I draw, design and build a lot of the things, and he bends glass, which I don’t do. So it’s a nice complement,” said Wolchock.

“There’s some things I look at and just draw a blank, and then Joe says ‘I have an idea’ and he takes the reigns on it and I don’t need to get involved, and vice versa.”

Wolchock said they built all 11 pieces that are sold on camera, and one of the best parts is selling the stuff they flip. He said in the second season they made a sale to a popular Toronto nightclub, but didn’t reveal which one.

“I don’t know if it’s art, or it’s just krap, but people seem to really like it.”