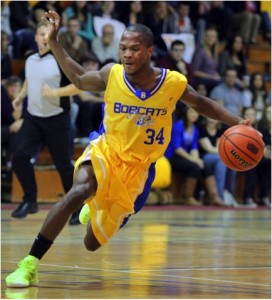 Ilarion Bonhomme (U OF M BISONS)

The Manitoba Bisons have secured a key recruit in Ilarion Bonhomme for the 2015 basketball season.

The 6’0″ point guard was the Canada West Rookie of the Year in 2011-12 and was named to the CIS All-Rookie team. He was also a standout point guard at Brandon University for three seasons.

“While at Brandon, he was always difficult to game plan against,” said Bisons head coach Kirby Schepp. “He has an outstanding ability to break down defenses and set up his teammates for easy looks. His unmatched speed will allow us to continue to play the pace that we want to play.”