Terriers, Canadians Win in Semis to Advance to Championship Game at RBC Cup 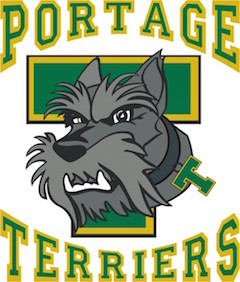 PORTAGE LA PRAIRIE, Man. – Jordan Boyd had a pair of goals and Zac Robidoux only had to make 12 saves as the Portage Terriers toppled the Melfort Mustangs 6-1 on Saturday to advance to the RBC Cup final.

Zack Waldvogel had a goal and an assist for the Terriers, who finished round-robin action as the top seed, while Brett Orr, Garick Gray and Taylor Friesen added a goal apiece.

David Heath found the back of the net for the No. 4 ranked Mustangs, who mustered up only six shots on net through the first two periods of play.

Portage went 2 for 4 on the power play while the Mustangs failed to score on two chances with the man advantage.

In the other semifinal, Jordan Larson scored 3:43 into double overtime as the No. 3 seeded Carleton Place Canadians edged the second-ranked Penticton Vees 2-1 to earn their spot in Canada’s men’s junior A hockey championship.

Stephen Baylis had the other goal for the Canadians in the second period. Guillaume Therien turned away 36 shots for the win.

Tyson Jost supplied the scoring for Penticton, which got 38 saves from Hunter Miska.

Carleton Place failed to score on four power plays while the Vees were also went scoreless on five attempts.

The championship game is Sunday.