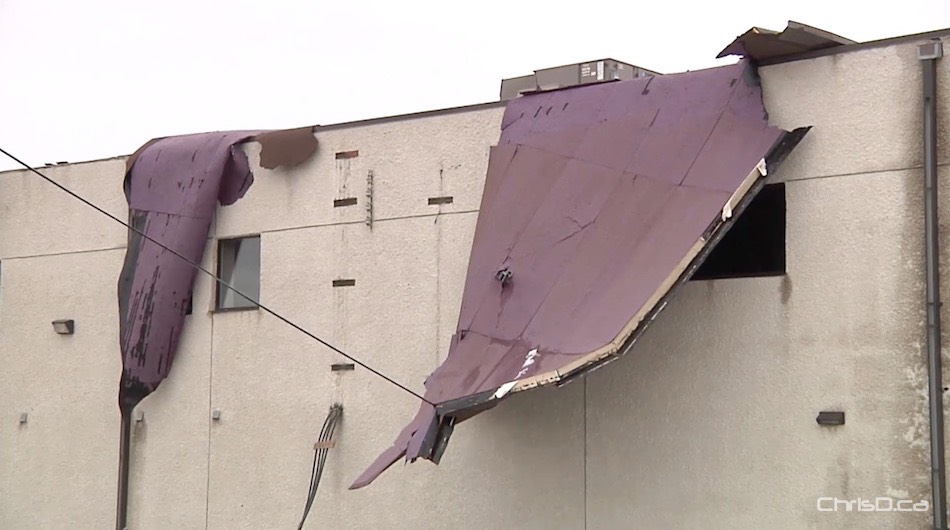 Pieces of the roof on The Bridge Church on Oxbow Bend Road were ripped off by the wind on Monday, May 18, 2015. (CHRISD.CA)

WINNIPEG — Manitoba Hydro crews have been working throughout the long weekend to restore power across the province after a late spring storm.

Hydro says it’s been all hands on deck over the last 48 hours and progress has been made. However, due to the severe nature of the damage, many new poles are needing to be installed in various areas.

A four-hour outage is required to the communities of Bloodvein, Berens River, Poplar River, Little Grand Rapids and Pauingassi this afternoon to repair a pole.

The majority of the damage has been caused by wind, ice and trees.

Manitoba Hydro expects to restore power to the vast majority of customers still out in Winnipeg by approximately 6 p.m. tonight, although isolated outages may still occur.

In rural areas we are anticipating restoration to the majority of customers by 10 p.m. tonight, although some areas will be restored substantially earlier. Small localized outages may persist into Tuesday morning.