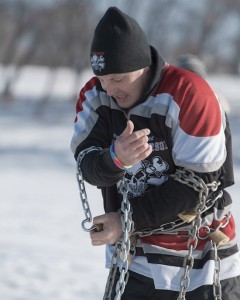 Dean Gunnarson attempts to escape from restraints on the Red River in Winnipeg. (HANDOUT)

A daring escape filmed on the icy Red River this winter will air on OLN tonight.

Winnipeg escape artist Dean Gunnarson risked everything when he was chained to two massive ice resurfacer machines in February. He had 60 seconds to escape the restraints before being pulled apart into pieces in front of a live audience.

In the “Escape Or Die!” episode, Gunnarson prepares for the stunt by climbing the ice tower in St. Boniface and visiting the Brandon Wheat Kings.

Theatrics expert Cary Tardi also takes a run at the ice tower in a web episode that can be found online once the show airs tonight.