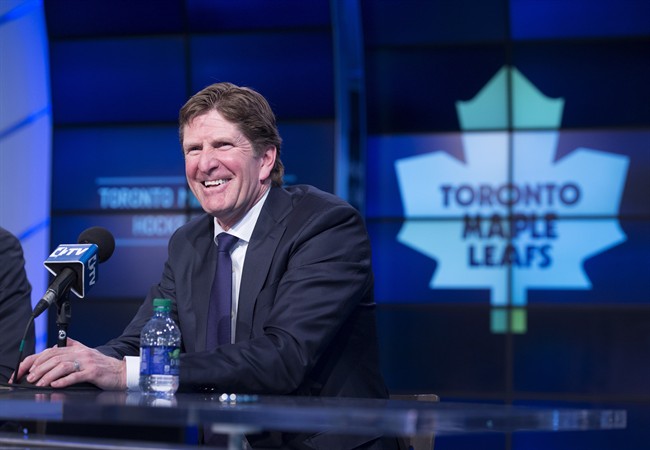 TORONTO – Mike Babcock took over as Toronto head coach Thursday, saying the Maple Leafs are Canada’s team and they need to be put back on the map.

Babcock said he was thrilled and excited to take the Toronto job. He cautioned the journey will be a long one, but promised it will be a lot of fun.

The former Detroit Red Wings coach takes over a 30-44-8 Leafs team that finished 27th in the league this season.

Babcock told the packed news conference in the foyer of the Air Canada Centre that he embraces the job ahead.

“I came here with my eyes wide open,” he said.

Babcock made it clear that he is aware of the size of the task ahead and would have no problems operating in the fishbowl that surrounds the Leafs franchise.

“This is going to be a massive, massive challenge,” he said.

It was a polished performance from a veteran coach, who managed to talk up his skills without seeming full of himself.

Babcock fever has been full-blown since news of his signing surfaced Wednesday.

He exited the vehicle at the Air Canada Centre at 10:44 a.m.

Babcock arrives with the weight of great expectations, not to mention a reported $50-million, eight-year contract that makes him by far the highest-paid coach in the NHL.

The coach drew laughs when a reporter asked about the huge contract, saying “Well, I’d like to answer that question Shanny (Leafs president Brendan Shanahan).”

Babcock called the mega-deal the Leafs’ commitment to success.

The Toronto Sun tabloid had 14 pages of Babcock coverage in its sports section. The Leafs took out a full-page ad in the Toronto Star, saying “Welcome to Toronto, Mike.” The same slogan adorned the electronic backdrop to the new conference.

Babcock, who spent the last 10 years behind the Detroit bench, follows in the footsteps of such Leafs coaches as Dick Irvin, Hap Day, Joe Primeau, King Clancy, Punch Imlach, Pat Buns and Pat Quinn among others.

Shanahan, who once played for Babcock, has pledged to rebuild the Original Six team that has little to celebrate about in recent decades.

That rebuild has already started.

Babcock celebrated his fourth birthday during the 1967 Stanley Cup, the last time the Maple Leafs won the NHL championship.

His credentials are blue-chip. His record in Detroit was 458-223-105 and the Wings made the playoffs every year on his watch.

The Saskatoon-raised Babcock, who is married with three kids, won the Stanley Cup in 2007-08 and led Canada to gold medals at the 2010 and 2014 Olympics, the 2004 world championships and 1997 world junior championship.

He is portrayed as a well-prepared coach who communicates what he wants and doesn’t like it if it doesn’t get it.

Buffalo, San Jose and St. Louis were reportedly among those interested in Babcock, who also got an offer to stay in Detroit.

“No Surprise, But Money Talks as Babcock Walks” was the Detroit News headline.

“But, seriously, folks, are you really going to fault Babcock, 52, for taking a king’s ransom to coach a team that he rooted for as a kid?” wrote Detroit Free Press columnist Mitch Albom. “To take the reins of a franchise that is like the New York Yankees of Canada, but hasn’t won in so long, you have to have grey hair to remember?”