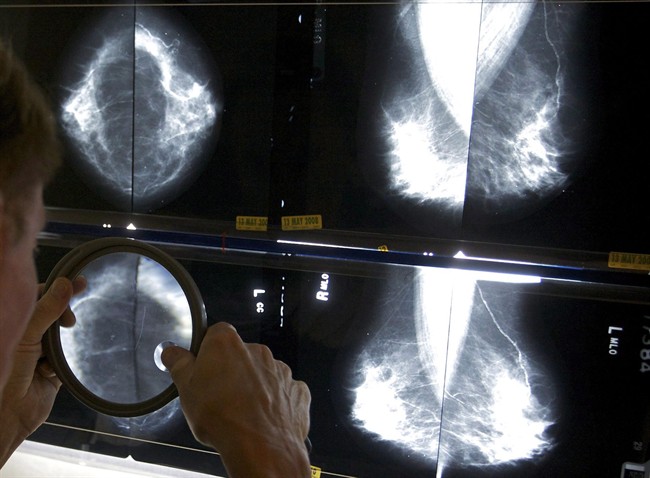 A radiologist uses a magnifying glass to check mammograms for breast cancer in Los Angeles, May 6, 2010. The total number of Canadians who will receive a cancer diagnosis will rise sharply over the next 15 years, a new report from the Canadian Cancer Society predicts. (THE CANADIAN PRESS/AP/Damian Dovarganes)

WINNIPEG — The number of new cancer diagnoses will increased by 40 percent by 2030, new numbers released by the Canadian Cancer Society predict.

The report — released Wednesday in collaboration with the Public Health Agency of Canada and Statistics Canada — estimates that 277,000 Canadians will be diagnosed with cancer in the next 15 years, up from about 200,000 this year, and 155,000 just a decade ago.

In Manitoba, the number of new cancer cases will grow at the slowest rate in all Canada. By 2032 there are expected to be 8,255 cancer diagnosis annually. Of the newly diagnosed cancers, more than half — 51 percent — will be prostate, breast, lung and colorectal.

“This is about: Canadians are living longer,” said Robert Nuttall, the cancer society’s assistant director for cancer control policy.

“The population is aging and it’s growing. And overall this is going to add to the sheer volume of cancer patients being diagnosed in Canada. But that overall risk, that proportion of Canadians who are diagnosed, isn’t going to change over this period.”

The society predicts cancer will take 2,800 Manitobans from their families this year — or eight Manitobans every day.