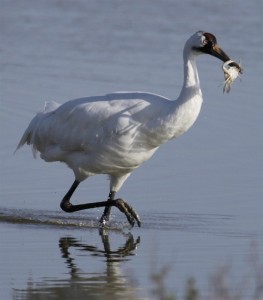 In this Feb. 25, 2010 photo, A whooping crane carries a crab at the Aransas National Wildlife Refuge near Rockport, Texas, Feb.25, 2010. Environment Canada’s plans to offer fly-in tours to the nesting grounds of endangered whooping cranes appear to have been grounded. (THE CANADIAN PRESS/AP/LM Otero)

EDMONTON – Parks Canada’s plans for fly-in tours to the nesting grounds of the world’s last natural flock of whooping cranes may be as endangered as the enormous birds themselves.

Excursions planned for May and June have been cancelled, because the birds have declined to nest near observation blinds built by officials at Wood Buffalo National Park on the Alberta-Northwest Territories boundary.

And while tours are still planned for August, an aboriginal band is preparing to ask the Federal Court for an injunction to ban the trips altogether.

“We haven’t been consulted on these tours,” said Chief Frieda Martselos of the Salt Lake First Nation in Fort Smith, N.W.T. The band has the right to practise traditional activities in the park. “We don’t want the tours to go ahead.”

Whooping cranes, the tallest bird in North America and with a two-metre wing span, were once hunted almost to extinction. Intensive conservation efforts from their wintering grounds in Texas to their nesting sites in northern Alberta have brought back a few hundred.

While there are captive breeding programs, the Wood Buffalo flock is the last natural one left, said Jeff Wells, chief scientist of the Boreal Songbird Initiative.

“They’re the only population that survived from the original birds.”

This spring, Parks Canada announced plans to bring bird enthusiasts to the remote park to watch the whoopers.

Leaving from Fort Smith, the tours would offer an airplane fly-over at 330 metres for $1,400; a helicopter tour with a fly-over and a landing to get a closer look for $2,900; and a helicopter trip with a hike to a camouflaged blind in the nesting area for $3,900.

All tours would be accompanied by Parks Canada guides.

“We are not doing our May-June delivery as no cranes have nested in the areas near our blinds,” said Parks Canada spokeswoman Christina Tricoma in an emailed statement.

“Parks Canada remains committed to this exceptional tourism product, which will highlight crane conservation efforts, provide local communities with economic benefits and offer a unique way for Canadians to build a meaningful connection to this iconic species. Additional tours are scheduled for August.”

Martselos said the first her band heard about the plans was in a newspaper article. That breaks a 1922 promise Parks Canada made to the band to consult them about activities within Wood Buffalo, she said.

The band also has conservation concerns.

“They prohibit us from using all-terrain vehicles in the park, but it’s OK to land a helicopter. It doesn’t make sense.”

She points out there are whooping cranes nesting on band-owned land that her First Nation has protected.

“They were on the endangered species list. We respected that.”

Wells said tours would offer the public a rare chance to see the cranes, perhaps building support for conservation.

But there are risks. He said any disturbance at a nest could disrupt the parents’ feeding schedule or expose eggs or chicks to the weather or predators.

“I’d like to think that they may have done some research to look at the potential disturbance perimeters.