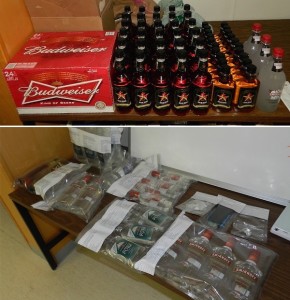 RCMP pulled over a vehicle on Highway 6 on May 21 for a routine inspection, where officers discovered 24 bottles of liquor. Police also seized small amounts of cocaine and marijuana, both packaged for sale.

Ray Ross, 22, of Cross Lake was arrested and faces numerous drugs and alcohol-related charges. He will appear in Thompson court on July 10.

All items were destined for Cross Lake, a dry reserve.

On May 31, police pulled over a speeding vehicle on Highway 73. The passenger told officers he was transporting liquor to Norway House, another dry reserve.

John George Queskekapow, 33, of Norway House was arrested and has been charged.