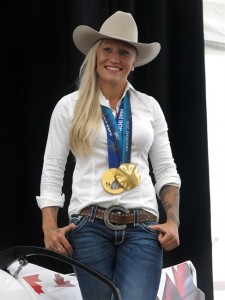 Olympic gold medallist Kaillie Humphries turned in her bobsled helmet for a stetson as she was named Calgary Stampede parade marshal in Calgary, Wednesday, June 3, 2015. (THE CANADIAN PRESS/Bill Graveland)

Humphries won the two-woman event at the 2010 Winter Games in Vancouver and then successfully defended her title in 2014 in Sochi.

Last November, she piloted a mixed-gender team to the bronze medal in the Canadian four-man bobsled championships.

She trains in Calgary.

This year’s parade is on July 3.