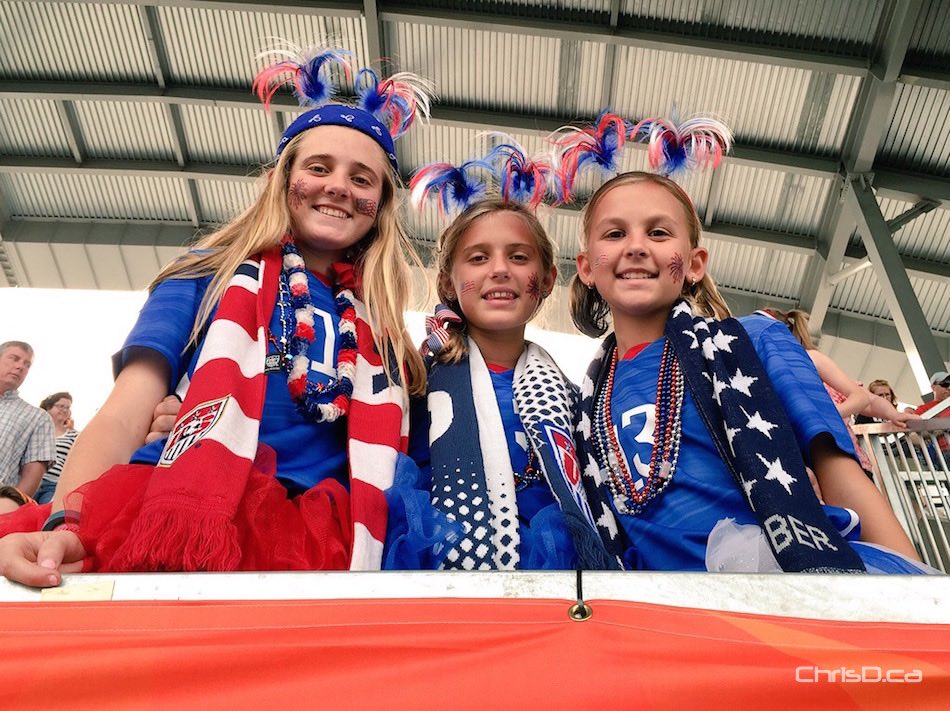 Young soccer fans from the United States show their colours ahead of the U.S. vs. Australia game at the FIFA Women’s World Cup in Winnipeg on Monday, June 8, 2015. (CHRISD.CA)

WINNIPEG — It was hard to spot a Canadian flag on Monday at Winnipeg Stadium. Actually, you really had to make an effort to find one and even squinting couldn’t quite do it.

That’s because the red, white and blue invaded the city for the first Group D match of the United States and Australia as part of the FIFA Women’s World Cup.

American licence plates were filing up Pembina Highway from both the south — coming from the border — and the north, with those staying downtown or exploring other parts of the city.

Winnipeg usually sees an influx of North Dakota or Minnesota plates in traffic during the spring and summer months, but this week, it’s been everything from Washington, Wyoming, Ohio and Alabama, to Kansas and Michigan, to name a few. United States residents have made the trek north to rally behind their team, and their tourist dollars are being pumped into the local economy.

Nearby establishments were packed with our friends from the south, leaving their mark at any watering hole near the University of Manitoba grounds and beyond. The patio at Barley Brothers was full hours before game time, while Wild Wing and Boston Pizza on Pembina were also experiencing an overflow of FIFA fans.

Before the Americans showed up Australia 3-1, Sweden and Nigeria ended their match in a 3-3 draw during the matinée event.

“Couldn’t be prouder to have the women of Team #USA representing us in stars, stripes, and shin guards. Good luck,” Democratic president candidate Hillary Clinton tweeted.

Six Canadian cities are hosting matches until July 5, including what’s usually known as Investors Group Field. Due to FIFA’s strict sponsorship agreements in place, all branding not associated with the league cannot be used, and therefore the venue is known simply as Winnipeg Stadium during the tournament.

Winnipeg hosts Australia vs. Nigeria and the U.S. vs. Sweden on Friday, June 12. Thailand vs. Germany and China vs. New Zealand play June 15, and Ecuador vs. Japan finish up the local excitement on June 16.