By The Winnipeg Folk Festival 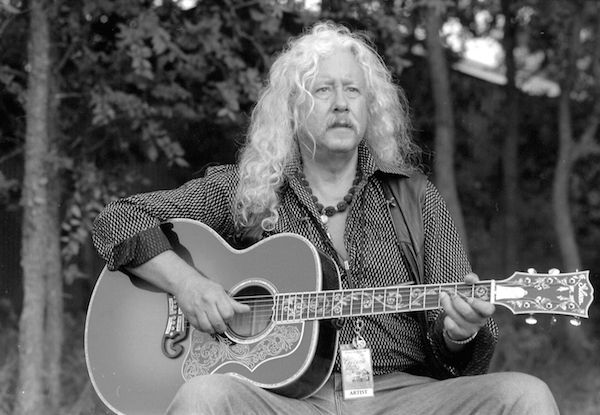 The song Alice’s Restaurant may be 50-years-old, but the themes in the classic folk anthem are as relevant today as they were then, says the song’s author, Arlo Guthrie.

“I think the circumstances have changed, but human nature doesn’t change all that much,” he says over the phone from his home in western Massachusetts. “I’m sure it’s the same in Canada: people in authority aren’t always the brightest bulb in the candelabra. When you have people who create laws and conditions we have to survive by, even when you find they are somewhat absurd from time to time, it lends itself to a sense of humour about the human condition, and that’s what made Alice’s Restaurant funny. What was absurd about it then is still the same.”

In the 18-and-a-half minute song, Guthrie describes an incident in 1965 when he and a friend were arrested for littering after eating a Thanksgiving meal at Alice’s Restaurant, which was actually the home of Alice and Ray Brock, who lived in a converted church. (Today the church in Great Barrington, Ma., is the site of The Guthrie Center, a spiritual, cultural, art and educational centre.)

He received a $50 fine for littering and was ordered to clean up the garbage. A year later, Guthrie was called up for the draft to serve in the Vietnam War, but he was deemed unsuitable for active duty due to his criminal history… of littering.

“I’m not the one that came up with the punch line: the military came up with that one. I had no idea; I would have never expected a person charged with littering could be refused entry into the military, even by today’s standards that’s absurd,” Guthrie says with a laugh.

The song, officially called Alice’s Restaurant Massacree, took on a life of its own following its 1967 release. It was developed into a film starring Guthrie and has become an annual Thanksgiving tradition on some radio stations in the United States despite its length, which prevented it from being played on radio at the time.

“I had no clue it would be popular, nevermind become part of popular culture,” he says.

“It puts a smile on my face, that the song has the ability to make somebody laugh, and in doing so, you laugh at the things that are most scary.

“My dad [folk icon Woody Guthrie] always wanted to reinforce that you should keep a smile on your face in the face of adversity. There’s a whole lot of adversary still going on today, whether you’re in the Middle East or elsewhere, but there’s a whole lot of people around the world who need to remember to smile a little more —­ it makes the world a better place to be. I learned that from him and taught my kids and grandkids that.”

Part of keeping people smiling is performing Alice’s Restaurant. He dropped it from his set list about eight years after recording it, but people kept asking for it, so every 10 years he undertakes special Alice’s Restaurant tours. He will bring the 50th Anniversary tour to the Winnipeg Folk Festival on Saturday, July 11, where he will also be receiving the WFF’s Artistic Achievement Award.

“I’m anxious to get up there and have some fun,” he says of the festival. “We had a great time last time we were there [in 2009]. We were driving through and did a string of shows then. I love driving around and going to parts of Canada you don’t normally get to see. This time we are flying there, so I’ll see what it looks like from the air.”

Visit WinnipegFolkFestival.ca for tickets and the full schedule of artists and activities July 9-12.