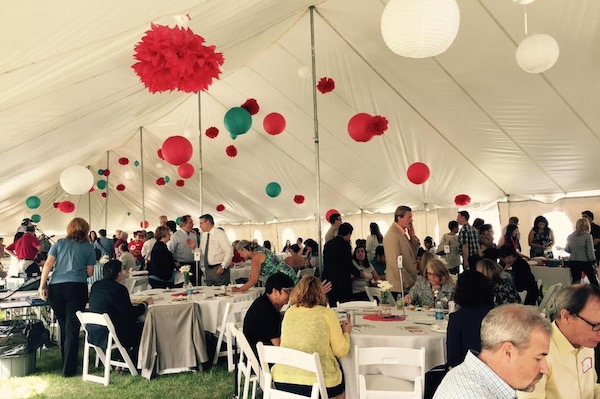 The United Way of Winnipeg hosted a Red Table luncheon on Wednesday, June 10, 2015, meant to generate ideas and discussion on creating a better Winnipeg. (TWITTER)

A large-scale outdoor picnic was the setting for a discussion about creating a better Winnipeg on Wednesday.

The United Way of Winnipeg held the Red Table luncheon with nearly 300 guests at the corner of King Street and Alexander Avenue. Attendees exchanging ideas included members of the muslim and aboriginal community, people from business and unions, CEOs, social workers and city councillors, students, educators and retirees.

It was the second of United Way of Winnipeg’s Winnipeg Wednesdays, asking Winnipeggers to start a conversation about the challenges and opportunities facing the city.

“In the 50 years United Way has been part of Winnipeg, so much has changed. But our vision of a thriving community where everyone can reach their potential has remained the sam,” said Ayn Wilcox, chair of United Way of Winnipeg’s 50th anniversary steering committee.

“We wanted to give Winnipeggers the opportunity to share with each other, and with us, what a better Winnipeg looks like to them.”

Discussions centred around important social issues including poverty, homelessness, school readiness, race relations and safety, as well as ways to support families and their thoughts on what a better Winnipeg might look like in five years.

United Way’s GenNext council is also hosting a pop-up Red Table dinner tonight at 7 p.m., under the canopy at The Forks.