Home » Columns » The Role of Canada’s Senate Under the Microscope

The Role of Canada’s Senate Under the Microscope 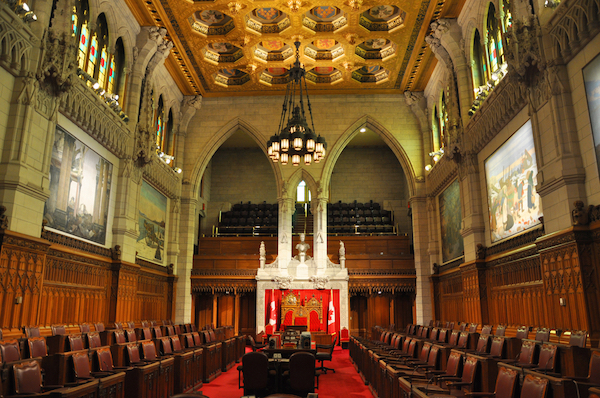 (Senate of Canada image via Shutterstock)

WINNIPEG — So, what shall we do with the Senate in Ottawa? The Red Chamber, conceived by the Fathers of Confederation 150 years ago as a place for sober second thought, is heading rapidly for rock bottom in the minds of a majority of Canadians.

Becoming a Senator is not something any young person aspires to, unless he’s maybe a young hockey player in the National Capital Region. The report by Auditor General Michael Ferguson paints a grim picture of a group of unapologetic political hacks who are not about to part with any of their entitlements, even at the risk of being marched off to jail. That’s not really much of a risk. Despite being on trial on 31 criminal counts, not even Mike Duffy is likely to do time behind bars for misusing taxpayers money.

Ferguson is recommending a new independent body to oversee such matters, replacing the cozy little club known as the Board of Internal Economy. Members of the House of Commons have a similar system, and without much fanfare, many MPs have been ordered to pay back expense claims that were deemed to be improper. The Auditor General says he would love to go through an audit in the Commons, but don’t hold your breath.

Stephen Harper has not appointed anyone to the Senate in more than two years, and more than anyone right now, he would love to be able to lock the door to the Red Chamber and throw away the key.

Premier Brad Wall of Saskatchewan is the only premier so far to favour abolition. The Supreme Court declared just over a year ago that the Senate cannot be abolished without the unanimous consent of the provinces, and that just ain’t gonna happen. Quebec and Ontario continue to argue that the Senate provides regional balance in Ottawa. Making such a case is getting more and more difficult, and the chamber of sober second thought is becoming our own personal Bleak House.

← Previous: U2 Lead Singer Bono Visiting Ottawa on Monday for Meetings with Leaders Next: Police Discover Body Near the Banks of Red River →
Tags: Ottawa