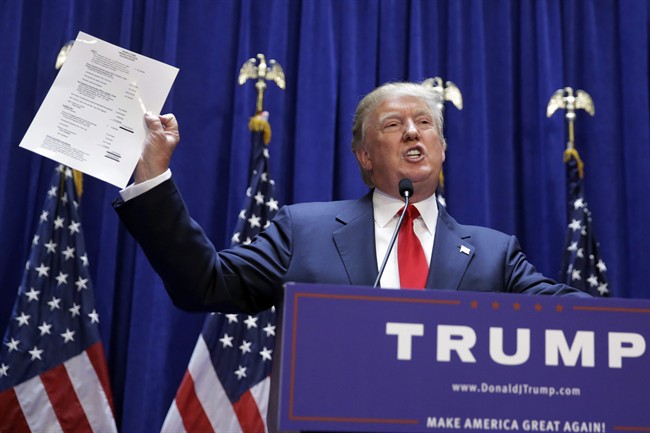 Developer Donald Trump displays a copy of his net worth during his announcement that he will seek the Republican nomination for president, Tuesday, June 16, 2015, in the lobby of Trump Tower in New York. (AP Photo/Richard Drew)

Donald Trump might never be president of the United States — at least not judging by the mockery from Democrats and mournful tweets from some Republicans following his campaign launch Tuesday.

But he just might have succeeded in carving out a place in American political history, with one of the more unusual announcement speeches of any candidate.

He even achieved the rare distinction of becoming embroiled in a dispute on Day One of his presidential candidacy with Canadian rock legend Neil Young.

The bombastic billionaire arrived onstage by escalator, descending to Young’s “Rockin’ In The Free World.” His choice of theme music, a song about American decline sung by a left-wing foreigner, was hardly the day’s lone surprise.

Nor was the late-day statement from Young’s management team that said: “Donald Trump was not authorized to use ‘Rockin’ In The Free World’ in his presidential candidacy announcement. Neil Young, a Canadian citizen, is a supporter of (Democrat) Bernie Sanders for president.”

Trump’s entire speech was a string of outlandish soundbites — a hit-parade of far-out phrases crammed into a single 45-minute performance.

After toying for years with the idea of a presidential run, the real-estate mogul finally announced his plan to seek the Republican nomination. He did it without speaking notes.

In the process, Trump:

—Insulted Mexicans: Trump promised to build a giant wall along the border, and force Mexico to pay for it. “They are not our friend, believe me. They are killing us economically. The U.S. has become a dumping ground for everybody else’s problems. When Mexico sends its people, they are not sending their best… They are bringing drugs. They are bringing crime, their rapists, and some I assume are good people.”

—Bragged about his wealth, said he wasn’t bragging: Trump pulled out a sheet of paper and said his team of accountants had spent months tabulating his considerable net worth. They finally settled on $8.7375 billion. “I’m really rich. And by the way, I’m not even saying that (to) brag. That’s the kind of mindset, the kind of thinking, you need for this country… We have the opposite thinking: We have losers.”

—Plugged his golf courses: He insulted President Barack Obama for playing so much golf, then pivoted into a sales pitch: “I have the best courses in the world. So I’d say, if you want… I have one right next to the White House.”

—Called many people stupid: America’s leaders for paying interest on debt; New York State officials who allowed prisoners to escape; people letting Mexicans slip through the border — all branded with the same dreaded epithet: “How stupid are our leaders?”

—Compared the Chinese to Super Bowl champion Tom Brady: “I just sold an apartment for $15 million to someone from China. Am I supposed to dislike them?… I love China. But their leaders are much smarter than our leaders. It’s like having Tom Brady and the New England Patriots playing a high-school football team.”

—Issued tariff threats: One of the things he’d do, he said, is call Ford’s president and say: “Congrats on building the new plant in Mexico… Lemme give you the bad news.” The bad news? A 35 per cent tax on every part made in Mexico, until Ford moves a plant to the U.S.

—Teased Secretary of State John Kerry for breaking his leg while bicycling: Trump said he’d be busy preventing Iran from getting a nuclear weapon instead of cycling. “I promise: I will never be in a bicycle race. That I can tell you.”

His speech carried several dire comparisons of the U.S. to a “Third World country,” because of crumbling infrastructure.

But he concluded on a positive note: “Sadly, the American dream is dead. But if I get elected president, I will bring it back — bigger, and better and stronger.”