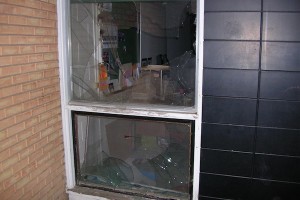 Twenty-nine windows were broken and two school buses were damaged in the parking lot at around 2:30 a.m.

Two males fleeing from the scene were eventually arrested.

A 26-year-old man from the RM of Ritchot, and a 16-year-old boy from Emerson, Manitoba have each been charged with mischief over $5,000.

They will appear in St. Pierre-Jolys on August 11.

RCMP say the two did not gain access to the inside of the school.