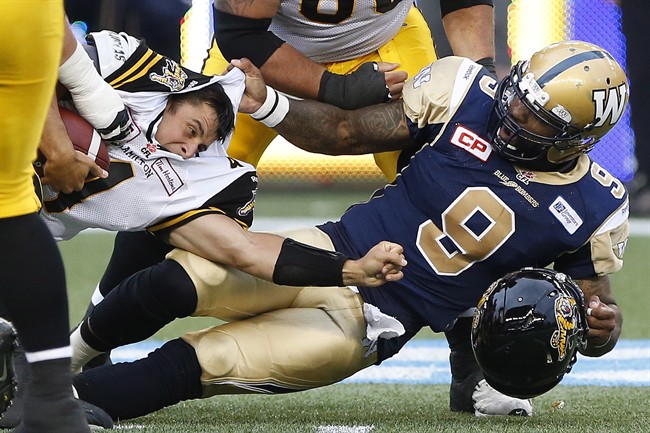 Winnipeg Blue Bombers’ Thaddeus Gibson (9) makes the sack but gets a major penalty for ripping off Hamilton Tiger-Cats quarterback Zach Collaros (4) helmet during the first half of CFL action in Winnipeg Friday, June 19, 2015. (THE CANADIAN PRESS/John Woods)

WINNIPEG — The Hamilton Tiger-Cats scored on their first four drives and never looked back Friday night, beating the Winnipeg Blue Bombers 26-15 in the final preseason game for both teams.

In front of 24,344 fans at Investors Group Field, Hamilton’s quick start was driven by quarterback Zach Collaros, who had 183 yards and a touchdown pass to Bakari Grant in the first half. Grant also had eye-popping numbers, dominating the first half with five catches for 87 yards.

Leading O’Shea’s Bombers was quarterback Drew Willy, who played the entire first half and one second half drive, going 11-of-17 for 147 yards.

“I think every competitor wants to win every game… They’re a good football team, give them credit, but at the same time we did some things on offence, defence and special teams that just isn’t winning football,” said Willy. “Guys in that locker room were upbeat, they were ready to fix the mistakes and get ready for Day 1.”

Brian Brohm, Josh Portis, and Robert Marve all got time at backup quarterback after Willy exited. The depth chart at quarterback looks ready to be shuffled, though, as it was Marve who impressed most, getting high yardage with 115 in the air and 42 on the ground.

“I felt more comfortable than the Toronto game,” said Marve. “I had two solid drives, I would’ve liked to get in the end zone but… it was a good situation being a young quarterback in the CFL.”

Elsewhere, Paris Cotton and Cameron Marshall had a touchdown each at the running back position, while Kristopher Bastien had four catches for 59 yards to lead in receiving.

With the loss, the Blue Bombers finish 1-1 in the preseason, while Hamilton runs the two-week table.

With 65 players on the roster for tonight’s game, head coach Mike O’Shea and the Bombers staff now have until 9 p.m. CST tomorrow to announce the final 46 man and practice rosters.

“We’ve got a lot of tape to look at, to evaluate these guys. You saw from camp and the first few exhibition games, there’s going to be some tough decisions,” said O’Shea. “From the first few days of camp, we expected good competition.”