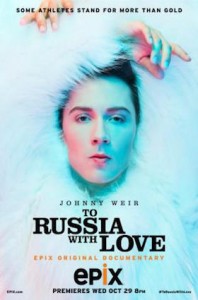 WINNIPEG — The Canadian Museum for Human Rights will pre-screen a new documentary on Russia’s anti-gay law during the Olympics.

“To Russia with Love” will run Wednesday, June 24 in advance of its national TV debut on CBC the following night.

Winnipeg director Noam Gonick is behind the film, which explores the impact of Russia’s anti-gay propaganda law as the world converged on Sochi for the 2014 Olympic Winter Games.

“The CMHR, as a national museum with its focus on human rights for all, foregrounds the important work being done by activists from all walks of life,” Gonick said. “Filming sports legends like Billie Jean King and Mark Tewksbury, we learned how trailblazing activists changed perceptions and made possible many of the freedoms we enjoy today.”

The screening will run from 7-9 p.m. in Bonnie & John Buhler Hall.

Following the film, CBC Manitoba Radio One host Ismaila Alfa will moderate a question period with Gonick and Sundance Productions president Laura Michalchyshyn, who co-founded the company with Robert Redford.

To reserve a free seat, send an e-mail to [email protected].