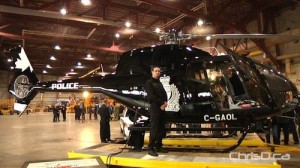 The Winnipeg Police Service shows off its Air 1 helicopter in 2010. (CHRISD.CA FILE)

Some red-faced Winnipeg police officers are dealing with an embarrassing situation after their X-rated conversation was broadcast to thousands of city residents on Monday night.

Pilots in the Air 1 police helicopter left their speaker on, having their conversation exposed for all to hear. Those in the West End and North End reported hearing the alleged sexually-charged exchange.

“The involved members were not able to hear the public address system from within the aircraft,” police said in a press release. “They became aware their conversation had been broadcast and immediately turned the system off.”

“The Winnipeg Police Service, the Flight Operations Unit, and the involved members sincerely apologize to all members of the public, especially those who overheard the broadcast. ”

Police are reviewing the incident.

Winnipeg Twitter users began sharing what they heard and soon after the hashtag #Whoops was trending city-wide.

@PatOndabak @afixedaddress the only other words we could discern were “….too much body hair.”

Pilots in the Winnipeg police helicopter having a conversation with their loudspeaker on. Pretty funny to hear. #Winnipeg #wpgpolice

Umm… @wpgpolice ya might want to tell the helicopter they are broadcasting. Sounds like an interesting conversation between the 2 guys 🙂

That moment you realize you left the speakerphone on while having an X-rated conversation in a Police Helicopter. #whoops

Hey #airone if you’re still around can you swing by my house and read me a story? Thanks. #speakerphone #winnipeg