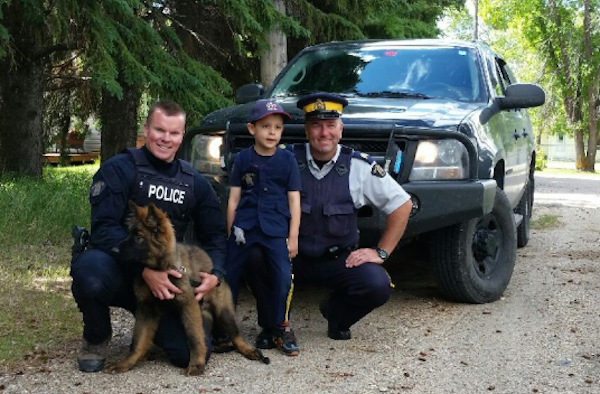 A five-year-old Rossburn, Manitoba boy has come face-to-face with the RCMP service dog he helped name.

Jackson Antoniw submitted the name Hector in the RCMP’s national Name the Puppy Contest and was chosen as the winner on April 8.

Hector was born at the Police Dog Service Training Centre in Innisfail, Alberta and is currently being trained in Thompson, Manitoba.

The thirteen winners across Canada were presented with a photograph of the dog they named and a written letter from the officer in charge of police dog services.

The dog’s trainer, Const. Kevin Challoner, and Hector, visited Rossburn Elementary School to present Jackson with his prize on June 18.

“Jackson actually got to meet Hector, which is an extremely rare circumstance,” said Cst. Challoner. “It’s not often a dog is stationed to the province in which it was named and then gets to meet the child who named him. It was a privilege to bring Hector to meet Jackson and see the smile on Jackson’s face. They really got along! It was a great moment.”