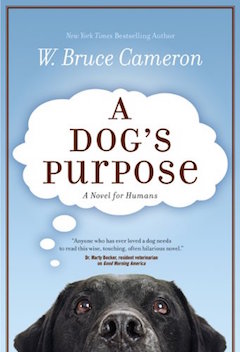 DreamWorks will shoot a film based on the novel ‘A Dog’s Purpose’ in Winnipeg this summer. (AMAZON)

Winnipeg is becoming more widely known for hosting big name movie productions, and now, another one can be added to that list.

Sources confirm to ChrisD.ca that DreamWorks will begin production on a new film here later this summer.

The movie will be based on “A Dog’s Purpose,” a New York Times bestseller by American humourist W. Bruce Cameron. The book centres around a dog’s journey through several reincarnations and how he looks for his purpose through each of his lives.

The movie will be directed by the Oscar-nominated Lasse Hallstrom.

Industry insiders say production is expected to generate a substantial sum for the local economy, especially given the province’s film tax credit, which has drawn more U.S. film crews to the city over the last several years.

According to IMDB, the film will star Swedish actor Anton Glanzelius.

← Previous: FIFA, CFL, NHL -- What a Time to Be a Fan: Currie Next: Multi-Vehicle Crash East of Winnipeg Sends Several People to Hospital →
Tags: Movies | Winnipeg