Winnipeg police have reason to believe Guido Amsel is targeting his ex-wife, who has been involved in a lengthy litigation case.

Over the weekend, police took their investigation to addresses on Washington Avenue, Pandora Avenue, Springfield Road, and most recently 280 Stradbrook, where an explosive device was found Sunday night in the law firm of Orle Bargen Davidson LLP.

Amsel remains in police custody, charged with two counts of attempted murder, one count of aggravated assault and a number of offences related to possessing explosives. 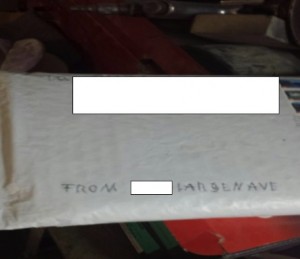 One of the suspicious packages found after a search warrant was carried out over the weekend. (WPS / HANDOUT)

Police say it appears Amsel has targeted legal counsel who have represented his ex-wife or him in the past.

Police are warning of other packages that could be out there, having potentially been sent to other legal counsel or justice officials who have dealt with Amsel.

The packages already discovered have had distinct packaging and lettering. They are believed to have been sent through Canada Post between June 29-30.