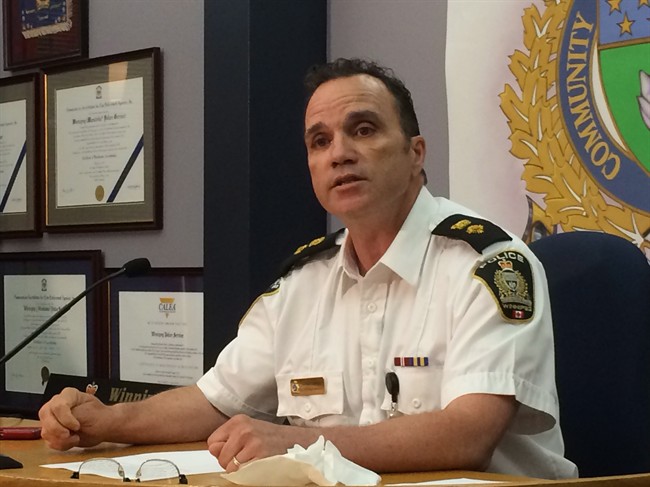 Winnipeg Police Service Supt. Danny Smyth talks to the media during an availability in Winnipeg on Sunday, July 5, 2015. (THE CANADIAN PRESS/Steve Lambert)

WINNIPEG – Winnipeg police investigating the bombing of a law firm say if there are any more suspicious packages in the mail they will likely be found in the next day or so.

So far three bombs have been found and police were investigating reports of a suspicious package discovered at a Canada Post depot in the city Monday morning.

One bomb blew up on Friday seriously injuring a lawyer, Maria Mitousis, 38. Two others bombs were detonated by police on the weekend with no injuries.

Guido Amsel, 49, has been charged with two counts of attempted murder and other offences. Police believe he was targeting his ex-wife and the lawyers who were involved in a lengthy legal dispute between the couple.

Officers were warning any justice officials who have had contact with Amsel to be cautious with the mail they received on Thursday and Friday.

Winnipeg Mayor Brian Bowman said police likely saved lives with their work over the weekend tracking down a suspect.

“The events that started on Friday are harrowing. Across our community I think it is safe to say we are reeling as Winnipeg our home as always seemed impervious to such ruthless, vengeful attacks,” Bowman said.

“The exemplary efforts of all of our first responders this weekend likely saved lives and further injuries. So thank-you on behalf of the citizens of Winnipeg.”

Amsel was being held in custody. Police said they were continuing to search a business and a residence linked to the suspect.

Court records show he went through a divorce that dragged on for years and was also sued by his ex-wife. In both cases, Amsel’s ex-wife was represented by Mitousis.

Police have said Mitousis was alone in her office when a package delivered by Canada Post exploded. A source in the legal community said Mitousis had surgery and lost one of her hands.

Colleagues set up a fundraising website which had raised almost $15,000 in little over 24 hours. The site said Mitousis faces “a long road to recovery.”

Police said the bomb that was found Saturday was delivered to a business connected to Ansel’s ex-wife.

The device that was detonated by police Sunday night was at a law firm connected to a lawsuit Amsel’s ex-wife filed in 2010 that involved a numbered company the couple had set up more than a decade earlier. Amsel has continued to operate the numbered company.

Records from the Rural Municipality of Springfield, just outside Winnipeg, show he was granted the right last fall to set up a small car lot in the community.

He was scheduled to apply for another business permit at the end of May, but his representative did not attend, according to minutes of the council meeting.