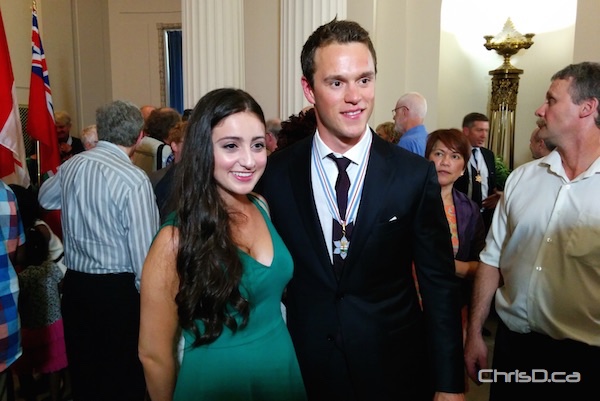 Chicago Blackhawks captain Jonathan Toews at the Manitoba Legislative Building on Thursday, July 9, 2015, after being inducted into the Order of Manitoba. (CHRISD.CA)

A public celebration will begin at 2:30 p.m. at the Jonathan Toews Sportsplex, 1188 Dakota Street. A Q&A session will give fans the opportunity to ask a question, but unlike previous Stanley Cup celebrations, no autographs or individual photographs will be allowed.

Toews played for the Dakota Lazers as a young hockey player, and Dakota’s main building was renamed in his honour after his first Stanley Cup win in 2010 and gold medal in the 2010 Winter Olympics with Team Canada.

Toews, who was born in Winnipeg, was in the city Thursday for a series of other events. The NHL star announced more than $116,000 in grants alongside The Winnipeg Foundation through its Nourishing Potential Fund. The province also inducted Toews and 11 others into the Order of Manitoba at the legislature.