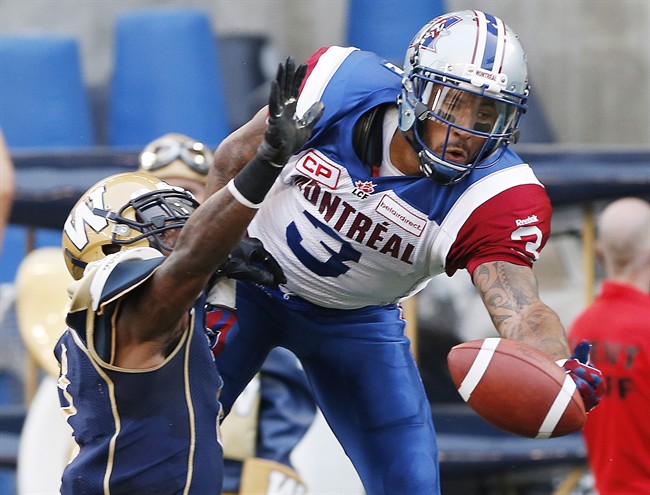 Winnipeg Blue Bombers’ Demond Washington (7) defends as Montreal Alouettes’ Cody Hoffman (3) can’t haul in this pass in the Bombers’ end zone during the first half of CFL action in Winnipeg Friday, July 10, 2015. (THE CANADIAN PRESS/John Woods)

WINNIPEG — Though the end zone eluded the offence all night, the Winnipeg Blue Bombers found enough from their defence and special teams to beat the Montreal Alouettes 25-23 on Friday night.

Yes, the unlikely heroes for Winnipeg didn’t have Willy or Cotton on their jerseys. Instead, Johnny Adams, Lin-J Shell and Teague Sherman made the big plays in the second quarter to make up for a struggling Winnipeg offence. First, Adams had a pick-six interception on Montreal rookie quarterback Rakeem Cato. Then, with the clock running out on the half, Shell had a punt block and Sherman jumped on the ball in the end zone.

“I just happened to be in the right place in the right time. I was first,” said Sherman. “I think my speed increased incredibly as soon as I saw the ball out there.”

“Every single game is going to be different, and it’s going to take a different formula, a different recipe to get a win,” said Bombers head coach Mike O’Shea. “This game we had the right recipe.”

Cato had two interceptions, but quarterback Drew Willy and the Bombers offence struggled to capitalize on their opportunities all night. The team had 292 yards, but drive after drive stopped shy of the end zone. This worked out for kicker Lirim Hajrullahu, who had four field goals, but made for an unnecessarily dramatic finish.

The offence did put together some nice figures, despite their inability to finish. Wide receiver Nick Moore had his third straight game with at least six receptions and 70 yards, grabbing seven for 71. His partner in the receiving corps, Clarence Denmark, had two catches for 73 yards a week after being shut out against Hamilton. Willy, resilient after taking a brutal hit just a week earlier, was solid with 251 yards on 20-for-29 passing. The starter also (surprisingly) led the team in rushing yards with 28.

“Defence played lights out. We did some good things on offence, obviously we need to put the ball in the end zone,” said Willy. “We had some good throwing plays, we need to run the ball a little better and we will. It’s just one of those things, they’re known for stopping the run and they’re a solid defence.”

For Montreal, Cato had the two interceptions, but put up great numbers elsewhere with 317 yards on 22-for-31 passing. His positives included a good rapport with S.J. Green, who had six receptions for 180 yards. Tyrrell Sutton had a great night rushing as well, getting two touchdowns and 74 yards on 17 carries.

“There was a focus [on defence], we were more attentive to what we had to do individually and that makes us work well as a team. That was the emphasis this week,” said defensive back Chris Randle, who had the other interception on Cato. “It’s hard to get wins in this league, so we’re going to enjoy this one for the first night and go get another one.”

With the win, the Bombers improve to 2-1 to lead the West Division. Montreal falls to 1-2. Winnipeg’s schedule now takes a tour through Alberta, with Calgary in Week 4 and Edmonton in Week 5. Next week’s game against the Stampeders is Saturday, July 18 at 6 p.m. CST.