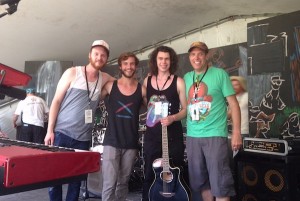 Until Red has won the Stingray Rising Star Award at this year’s Winnipeg Folk Festival. (HANDOUT)

Manitoba roots-rockers Until Red are the recipients of the Winnipeg Folk Festival’s Stingray Rising Star Award.

The band, made up of Liam Duncan, Roman Clarke and Dylan MacDonald, were presented with the $1,000 award on Friday, and a guitar at the Shady Grove stage.

The Rising Star program is now in its 15th year and has played a role in setting up numerous musicians on their way to strong careers. Many of these same artists have gone on to perform as part of the main Winnipeg Folk Fest roster, including The Reverend Rambler and Australia’s Daniel Champagne.

Since their demo release of Johanna in January 2014, Until Red has played nearly 90 shows, including at the Brandon Folk Festival, Harvest Sun Festival, Dauphin Countryfest, and Rockin’ the Fields of Minnedosa.

This is Stingray’s sixth year as a presenting partner for the Young Performers Program.