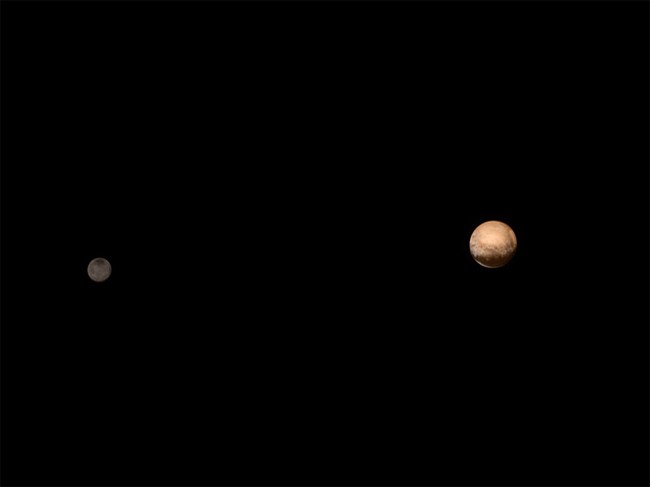 NASA’s New Horizons spacecraft was about 3.7 million miles (6 million kilometres) away from Pluto, right, and Charon when it snapped this portrait late on 8 July 8 2015. Since being discovered in 1930, Pluto has been a deep mystery to the space community. On Tuesday, however, scientists will get their closest and clearest look at the dwarf planet when NASA’s New Horizons spacecraft is expected to get within 12,500 kilometres of its surface. (THE CANADIAN PRESS/HO – NASA/Johns Hopkins Applied Physics Laboratory/Southwest Research Institute)

MONTREAL – Since being discovered in 1930, Pluto has been a deep mystery to the space community.

On Tuesday, however, scientists will get their closest and clearest look at the dwarf planet when NASA’s New Horizons spacecraft is expected to get within 12,500 kilometres of its surface.

The unmanned spacecraft, the size of a piano, was launched from Cape Canaveral, Fla., on Jan. 19, 2006, and will conduct a six-month reconnaissance of Pluto.

Afterwards, it’s expected to explore space bodies in a region well beyond Pluto known as the Kuiper Belt.

Randy Attwood, executive director of the Royal Astronomical Society of Canada, says New Horizons is the first spacecraft to ever fly to Pluto, which is more than five billion kilometres from Earth.

“So, after this, all nine of the original planets will have been visited by spacecraft,” he said in an interview.

Attwood also predicted it would be quite some time before any other spacecraft ventures there in the future.

“We won’t see that for decades — if ever in our lifetime,” he said. “So this is our one shot at Pluto to get a close-up look and understand it and its five moons.”

Pluto’s diameter is 2,300 kilometres and is about one-sixth the size of Earth. It’s also slightly smaller than our moon.

Any discovery of old dead volcanoes or dead geysers on Pluto would suggest it was once an active planet, he said.

Pluto, which is one-third water ice and two-thirds rocky material, was originally classified as the ninth planet in the solar system, but was reclassified as a dwarf planet in 2006 because it did not meet criteria set out by the International Astronomical Union to qualify as a planet.

Richard Leveille, a planetary researcher at McGill University, explains that dwarf planets are generally smaller and follow an oval rather than circular orbit like the other eight planets.

He suggests the New Horizons mission might help to clear things up once and for all about Pluto.

“People want to know what this place is all about,” Leveille said. “Is it just some quirky iceball (-230 C) or is it indeed substantial enough to call it a planet?

“We certainly know it’s extremely cold on Pluto, so we won’t expect life there.”

← Previous: Hope for the Future as Youth Take Up Worthwhile Opportunities Next: Record 500 Teams Heading For MTS Super-Spike →
Tags: Canada