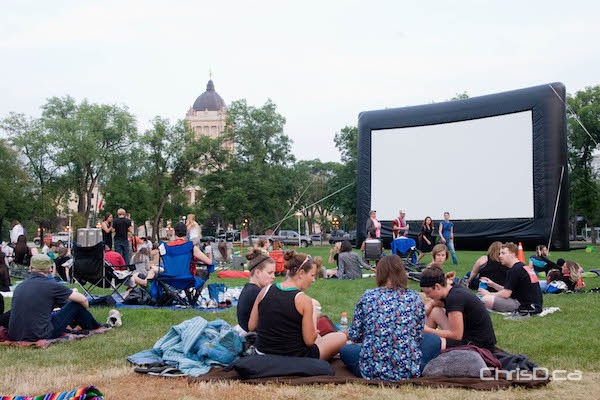 Movie-goers gather in Memorial Park on Tuesday, August 5, 2014 for a screening of “The Goonies” at Movies on Memorial. (TED GRANT / CHRISD.CA)

The Downtown Winnipeg BIZ is once again transforming outdoor downtown spaces into places to gather to watch some of Hollywood’s biggest blockbusters on a 40-foot screen.

Snacks from nearby food trucks and restaurants will be available at each screening.

August 22 – Guardians of the Galaxy

Movies start at sundown – about 9 p.m.

Free for people arriving on bikes, transit or foot, or $10 to reserve a space for your car!

In case of rain, the film will be screened on the following Wednesday

Movies start at sundown – about 9 p.m.

The Downtown Winnipeg BIZ will also present Rush Hour 3 at the green space at the corner of King Street and Pacific Avenue during the Chinatown Street Festival August 29 and 30.

“Movies on Memorial and the addition of the Downtown Drive-In screenings have been hugely popular,” says Stefano Grande, executive director of the Downtown Winnipeg BIZ. “It’s an opportunity to capitalize on an affordable, outdoor, summer evening activity, whether it’s family night or date night.”