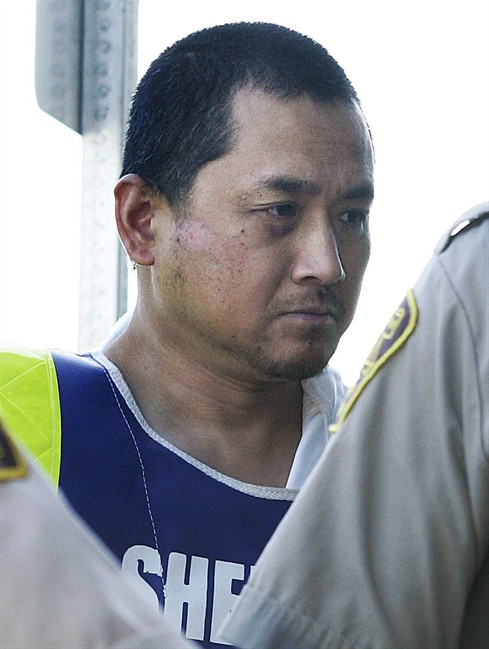 Vince Li, the accused in the Greyhound bus beheading of Tim McLean last Wednesday night, appears in a Portage La Prairie court Tuesday, August 5, 2008. The psychiatrist of a man who beheaded a fellow passenger aboard a Greyhound bus is recommending Vince Li be moved from a mental hospital to a community group home in Winnipeg. (THE CANADIAN PRESS/John Woods)

Two Ontario women who were traumatized by a beheading on a Greyhound bus have dropped their lawsuit against the company.

Kayli Shaw and Debra Tucker were on the bus in central Manitoba in July 2008 when another passenger – Vince Li – attacked his seatmate.

Passengers fled and police surrounded the vehicle as Li cut up and cannibalized Tim McLean’s body.

Shaw and Tucker accused the company of not providing adequate security and of leaving them with anxiety, depression and post-traumatic stress.

Greyhound denied the accusation and said it could not be sued under Manitoba’s system of no-fault vehicle insurance.

Shaw, who is from London, and Tucker, who is from Port Colborne, have discontinued their lawsuit; however, Tim McLean’s family is still pursuing similar legal action.

Li was found not criminally responsible for the beheading and sent to a psychiatric institution. He was initially kept in a locked ward but has been granted more freedom each year since then.

His doctors say he suffered from schizophrenia and heard voices telling him to attack McLean. But they add he has taken medication faithfully and made a lot of progress in the ensuing years.

The lawyer that represented Shaw and Tucker did not respond to requests for comment Tuesday. A spokesman for Greyhound said no one was available for an interview.