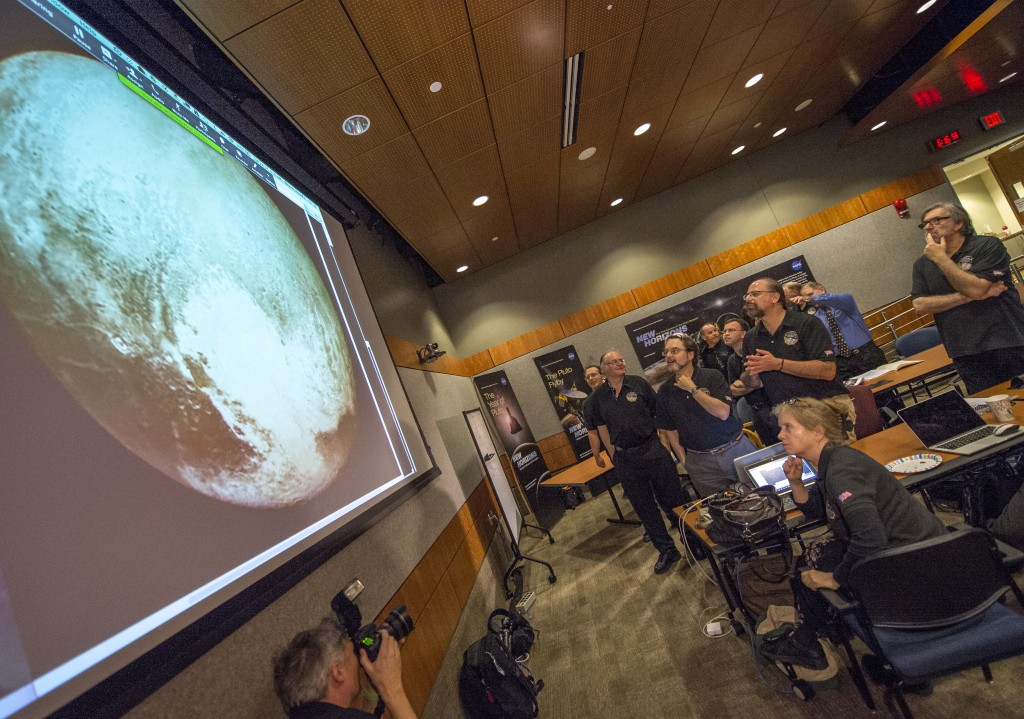 Members of the New Horizons science team react to seeing the spacecraft’s last and sharpest image of Pluto before closest approach later in the day, Tuesday, July 14, 2015, at the Johns Hopkins University Applied Physics Laboratory (APL) in Laurel, Maryland. NASA’s New Horizons spacecraft was on track to zoom within 7,800 miles (12,500 kilometers) of Pluto on Tuesday. (Bill Ingalls/NASA via AP)

CAPE CANAVERAL, Fla. – We’ve made it to Pluto by NASA’s calculations, the last stop on a planetary tour of the solar system a half-century in the making.

The moment of closest approach for the New Horizons spacecraft came at 7:49 a.m. EDT (1149 GMT) Tuesday, culminating a journey from planet Earth that spanned an incredible 3 billion miles (4.8 billion kilometres) and 9 1/2 years.

Based on everything NASA knows, New Horizons was straight on course for the historic encounter, sweeping within 7,800 miles of Pluto at 31,000 mph. But official confirmation won’t come until Tuesday night, 13 nerve-racking hours later. That’s because NASA wants New Horizons taking pictures of Pluto, its jumbo moon Charon and its four little moons during this critical time, not communicating with Earth.

The United States is now the only nation to visit every single planet in the solar system. Pluto was No. 9 in the lineup when New Horizons departed Cape Canaveral, Florida, on Jan. 19, 2006, but was demoted seven months later to dwarf status. Scientists in charge of the $720 million mission, as well as NASA officials, hope the new observations will restore Pluto‘s honour.

Inside “countdown central,” hundreds jammed together to share in the remaining final minutes, including the two children of the American astronomer who discovered Pluto in 1930, Clyde Tombaugh. The actual flight control room was empty save for a worker sweeping up; the spacecraft was preprogrammed for the flyby and there was nothing anyone could do but join in the celebration.

It takes 4 1/2 hours for signals to travel one-way between New Horizons and flight controllers, the speed of light. The last time controllers heard from the spacecraft was Monday night, according to plan.

New Horizons already has beamed back the best-ever images of Pluto and big moon Charon. The pictures are “mind-boggling to put it mildly,” NASA Administrator Charles Bolden said.

The newest pictures, from the actual flyby, won’t be transmitted until well afterward so the seven science instruments can take full advantage of the encounter. In fact, it will take more than a year to get back all the data.

On the eve of the flyby, NASA announced that Pluto is actually bigger than anyone imagined, thanks to measurements made by the spacecraft. It’s about 50 miles bigger than estimated, for a grand total of 1,473 miles in diameter.

Pluto is now confirmed to be the largest object in the so-called Kuiper Belt, considered the third zone of the solar system after the inner rocky planets and outer gaseous ones. This unknown territory is a shooting gallery of comets and other small bodies.

If a mission extension is granted, New Horizons will seek out another Kuiper Belt object before heading out of the solar system – for good.