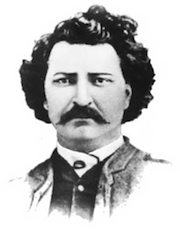 A Winnipeg city councillor says a peeling, crumbling monument to Louis Riel needs to be restored.

Brian Mayes says the structure is in such bad shape, people are using it as a notice board and putting up posters on it.

The monument is a slab of cement with a plaque at the bottom saying it’s a monument to Riel, the founding father of the province who was hanged for treason in 1885.

It was first put up near the St. Vital Centennial Arena in 1979 after the parkland was donated to the city by the Union nationale metisse Saint-Joseph, a Manitoba Metis organization.

He says the monument is an eyesore in its current state, adding that members of the group “didn’t realize that it had been fallen in disrepair.”

Repairing it is expected to cost a few thousand dollars.