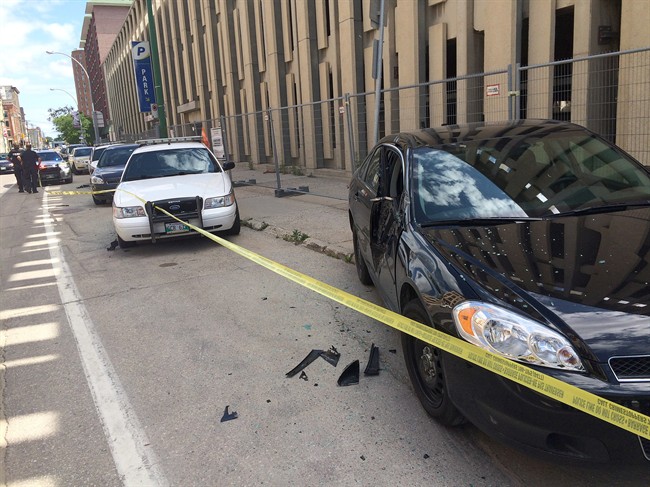 Winnipeg police say a rampage that ended with $100,000 worth of damage to five police cars and a man arrested after leading a high speed chase, started with a distracted driving ticket.

Police said a man driving a 2007 international cube van was stopped at the corner of Emily Street and Notre Dame Avenue and given a ticket for distracted driving at about 8:45 a.m. Monday. The driver objected but left the area.

At about 11:10 a.m., police said the driver of the cube van headed to the Public Safety Building  and deliberately smashed into five police cars before taking off. He did $80,000-$100,000 worth of damage, said police.

At about 12:15 p.m., an RCMP cruiser was heading eastbound on Hwy. 1 in Headingley when the van, traveling westbound, drove into a head-on collision course with the cruiser. The cruiser was forced swerve violently out of the way to avoid a crash.

Afterwards, WPS and RCMP pursued the suspect until he finally stopped after a spike belt was deployed near Portage la Prairie. He was taken into custody around 1:30 p.m.

He is in custody.