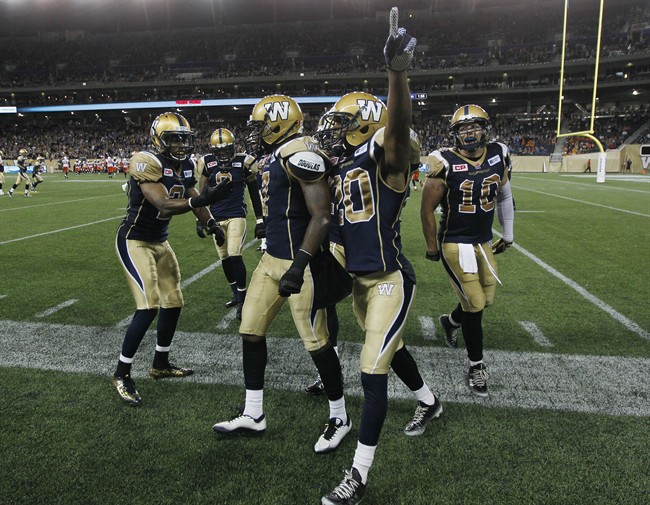 WINNIPEG — Showing resilience and a fair amount of guts, Drew Willy used all four limbs to pace the Winnipeg Blue Bombers to a 23-13 win Thursday night against the B.C. Lions. The quarterback left last week’s game against Edmonton with a knee injury, but returned to start this week to pass for 269 yards and two touchdowns while scampering for a team-high 72 yards on the ground.

“I’m confident in my ability, I’m obviously a drop back quarterback but at the same time I try to be athletic out there and do what I can,” said Willy. “I’m going to fight for my teammates.”

In front of 27,214 fans at Investors Group Field, Willy overcame a porous offensive line to spread the love to eight receivers on 17-for-25 passing. Receiver Darvin Adams had long plays of 36 and 56 yards, the latter resulting in a touchdown, for his total of 127 yards. Justin Veltung replaced an injured Nick Moore admirably, catching five passes for 58 yards. Winnipeg improves to 3-3 with the win, while B.C. falls to 2-3.

“It’s crazy because that just shows how tough [Drew] is and that makes everyone else around him want to play harder,” said Adams. “They tried to give me the game ball and I had to give it back to Drew because he’s the man, you know? Coming off an injury, to come back, play tough running the ball, trying to run people over and everything… you’ve got to love that.”

“He did what he had to do, he had a terrific game. I thought he managed the game extremely well, that’s what we expect from him,” said Bombers coach Mike O’Shea. “He’s got grit, everybody loves that. I trust him, his teammates trust him. Is it always going to look like that? Maybe not, but when it doesn’t look like that, let’s not forget this.”

On the Lions side, quarterback Travis Lulay was consistent, but three spectacular Bombers interceptions derailed his night. The biggest one came late in the fourth quarter, as Demond Washington sealed the win by collecting an errant pass deep in Winnipeg’s end. Johnny Adams and Sam Hurl had the other picks – for the latter, it was the first of his career.

Aside the interceptions, Lulay had 254 yards and one touchdown on 22-for-33 passing. In a hometown return, running back and Winnipegger Andrew Harris had a career-high 24 rushes for 117 yards to go with 51 yards receiving. Shawn Gore led the Lions with five receptions, collecting 57 yards. B.C. struggled with penalties throughout, committing a heinous 17 in the game.

Early on, Winnipeg was hampered by penalties as well. In the first half, kicker Lirim Hajrullahu sent two punts out of bounds to count for two of four Winnipeg special teams penalties. The sophomore’s struggles were offset, though, by his success kicking for points; he nailed his five attempts at field goals and converts. The Bombers played a much cleaner second half – only committing two total penalties – as they outscored B.C. 16-3.

Winnipeg will head east for next Sunday’s game, where they’ll seek revenge against a Hamilton team that gave them a 52-26 thumping in Week 2 at Investors Group Field. The Blue Bombers return home on Friday, August 14 to play Toronto.