Home » Sports » Smell Bacon? Must Be the New Goldeyes Jerseys

Smell Bacon? Must Be the New Goldeyes Jerseys 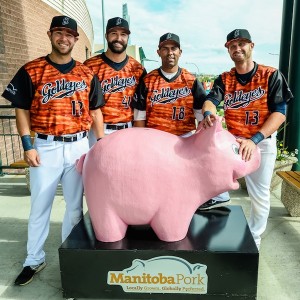 When the Winnipeg Goldeyes step out on the field at Shaw Park tonight, they will have a slightly (more tasty?) look to them.

In honour of August being Bacon Month, the Goldeyes have teamed up with Manitoba Pork to debut their new bacon-inspired jerseys.

Fans are invited to join Manitoba Pork’s pre-game barbeque, where pork on a bun with bacon jam will be served prior to the opening pitch. Proceeds from the barbeque also go to the Goldeyes Field of Dreams Foundation.

Food vendors on the concourse will also serve up bacon-themed specialties, including bacon caesars, maple bacon cupcakes by Cake-ology (served at Bodegoes), bacon poutine and Goldie Dogs at the famous Goldie’s Grill and Boston Pizza’s Meateor Pizza with bacon, to name a few. Fans purchasing a bacon-themed food or beverage item will also get a chance to win a Goldeyes bacon jersey.

The Goldeyes face the Amarillo Thunderheads at 7 p.m. Tickets are available through Ticketmaster and the Goldeyes box office.