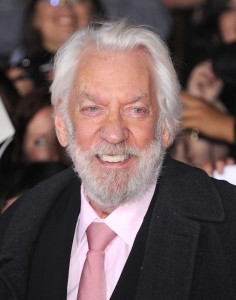 WINNIPEG — I well remember the first time I saw Donald Sutherland on a movie screen. It was the summer of 1967, and he was playing one of Lee Marvin’s crew of desperate men in “The Dirty Dozen.” I had no idea that he was even a Canadian, and the son-in-law of Tommy Douglas, the man who would one day be voted the greatest Canadian.

Donald is now 80 and still going strong in movies like “The Hunger Games.” He’s also quite angry that when other Canadians get to vote in a federal election in October, he won’t be allowed to take part. He was born and raised in New Brunswick and still has a home in this country, but his principal residence has been outside Canada for many years. Such people are ex-patriates, and more than a million of them have been declared ineligible to vote in October by the Ontario Court of Appeal.

It’s a complex legal issue going back more than 20 years, but two of the three Justices who heard the case agreed with Prime Minister Stephen Harper and company that ex-pats, like Donald Sutherland, should not get a ballot because they really don’t have any “skin in the game.” They won’t be affected by the actions of the government that gets elected.

The Justice who dissented was John Laskin. His father was the late Bora Laskin, who was Chief Justice of Canada, appointed by Pierre Trudeau in the 1970s. In his dissenting opinion, Justice Laskin said to rule otherwise makes second class citizens out of Canadians who may live elsewhere for a variety of reasons that have very little to do with their love of the country, and their ongoing desire to be part of the political process.

He also noted, as I did a couple of weeks ago, that even horrid criminals like Paul Bernardo will be allowed to vote in October, while members of the Order of Canada, like Donald Sutherland, will be denied that right which is supposed to be protected under the Charter.

Watch for this story to stick around for more than a couple of news cycles.