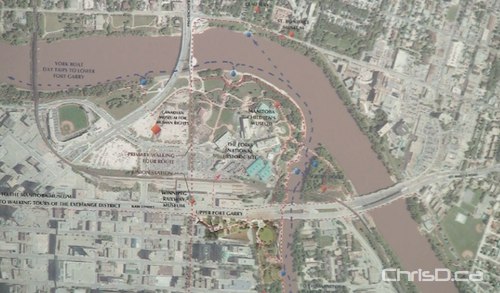 A rendering of Upper Fort Garry Provincial Park, as shown in 2010. (HANDOUT)

WINNIPEG — After years of construction, the fences around Upper Fort Garry Provincial Park are coming down.

The park has been in a revitalization phase since 2006, where work has been ongoing to create a unique space for visitors to interact with its history.

“Upper Fort Garry is the birthplace of Manitoba, and with the use of technology, including a mobile app, we will bring that story to life,” said Jimm Simon, executive director of Friends of Upper Fort Garry. “A key component to the site is the ability to interact with it digitally and we now have that capability.”

Through donor support and the reclaiming of a forgotten piece of land in downtown Winnipeg, the park was reborn as archeological work began.

The site officially became Upper Fort Garry Provincial Park on July 15, 2014 with an unveiling of the park that October.

Visitors will soon be able to interact and experience the park’s history through a new mobile app, which will be released on August 14.