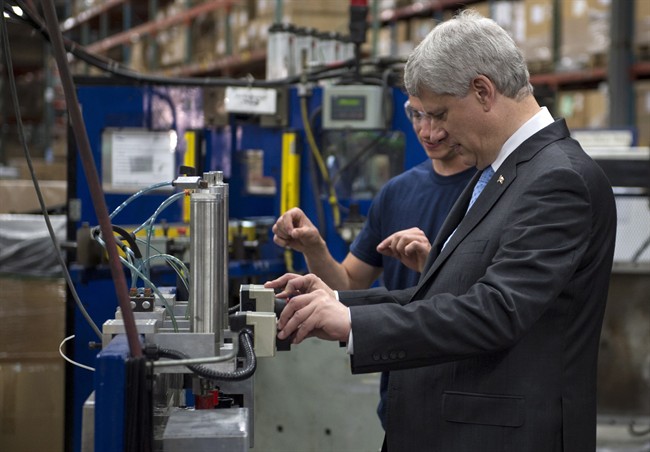 Conservative Leader Stephen Harper gets instructions on how to operate a machine that puts the finishing touch to a radiator while touring a industrial parts manufacture Monday, August 3, 2015 in Laval, Que. (THE CANADIAN PRESS/Paul Chiasson)

Before the leaders debate, the first week of Canada’s marathon election campaign was pretty boring stuff. It’s perhaps not surprising that the Premier of Saskatchewan, Brad Wall, chose to bring up the issue of equalization.

It’s a program that dates back to the 1950’s and 60’s when the prime minister and the premiers actually met face to face now and then. When Canada’s new constitution was signed by the Queen in Ottawa in 1982, equalization was enshrined therein.

This year, just under $17 billion is flowing from the have provinces — Alberta, BC, Saskatchewan and Newfoundland — to the have-nots. Manitoba is in the latter group, and Premier Wall thinks Greg Selinger is getting more than he should.

Manitoba’s share this year is almost $1.8 billion. Despite that, the Keystone province has a debt and deficit that continue to grow. Wall is determined that no matter how low the prices fall for oil and potash, Saskatchewan will be the last jurisdiction on earth to run a deficit.

Greg Selinger points out that Manitoba’s nearest western neighbour was in the have-not club in 2007, the year that the Roughriders beat the Blue Bombers in the Grey Cup. Wall’s NDP predecessor, Lorne Calvert, argued vigorously that the equalization formula should be changed by excluding resource revenues. In the interests of ‘solidarity,’ Wall supported Calvert’s position, but it was about as sincere as the folks who insist on saying “have a nice day.”

Don’t hold your breath waiting for equalization to become a hot issue on the federal campaign trail. It’s basically a series of arguments to keep lawyers and accountants busy. The average voter has never really embraced it with great passion.

Too bad, because there was a time, when men like Diefenbaker and Pearson and Trudeau #1 lived at 24 Sussex, that it was considered important to have a vision for the future of this place called Canada.