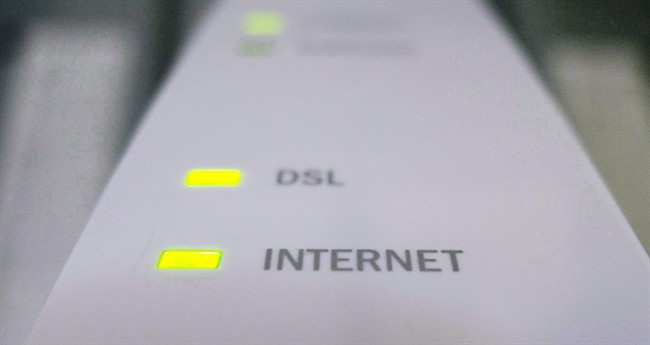 Lights are illuminated on a modem in Chelsea, Que., on July 11, 2011. (THE CANADIAN PRESS/Adrian Wyld)

NEEPAWA, Man. — When it comes to the viability of rural Canada, one of the most important factors is connectivity. It can’t be underestimated.

Having access to high speed Internet levels the playing field between rural and urban Canada. It gives farmers access to better information about markets and inputs. It gives rural children access to the technological skills needed for today’s world. It brings education, both formal and informal, into rural homes. It allows rural businesses, both large and small, to work beyond their geographic area.

Since I moved to rural Manitoba nine years ago, accessibility has improved by leaps and bounds. Nine years ago, most small towns were well served by hardwired high speed Internet, either though cable or telephone. But back then, you had two options if you lived out of town and wanted Internet service: dial up or satellite. Neither of them were good. Dial up was brutally slow and satellite was expensive and offered limited high speed usage. Since then, the technology has improved dramatically and wireless Internet, either by cell phone providers or stand-alone companies, has brought reasonably affordable high speed Internet to many rural homes and businesses.

Over the next couple of years, new investments will bring high speed Internet to many more rural homes.

Last week, local MP Robert Sopuck announced up to $9.9 million in funding to help Brandon-based NetSet Communications make high speed Internet available to nearly 48,000 homes. About 10,000 of these homes are in the Parkland/Westman region.

The funding will be used to put up 16 new towers. Standing 250 feet tall, these towers are about twice as tall as those currently used and will provide better service in areas with variable elevation. The whole project is expected to cost $25 million.

The money is part of the federal government’s Connecting Canadians Programs, which is backed by a $305 million commitment to connect an additional 128,000 rural and remote households to high speed Internet services.

I feel a little ambivalent about this. The federal government giving out millions to private corporations. But then again, it happens at the time. Governments routinely tender projects and put out request for proposals. The government doesn’t build our roads, they contract with an outside company. I have nothing against NetSet, I am actually a customer and having the service has made a big difference, but I still feel uncertain.

Do we want government doing the job themselves? In most cases, I would argue no.
Sopuck explained that NetSet’s proposal was chosen as theirs best met the requirements outlined in the RFP. He noted that they are a large player and could offer coverage throughout the constituency.

I think that overall, this is what we want from our governments. A private corporation is underwriting most of the cost and by all accounts, the government has followed a fair and accepted process and chosen an established company. We don’t want to see our money spent, with no concrete result to show for it. We want to see an identifiable benefit when government money is invested on a project.

But at the end of the day, unlike roads, this service isn’t of benefit to all rural Manitobans, only those who pay to be customers of NetSet.

Should the government have built towers which could have been used by NetSet, or Rogers, or MTS, or a small company? Maybe. Would it have been the most efficient use of the money, generating the greatest benefit for the lowest price? Maybe not. Which do we want?