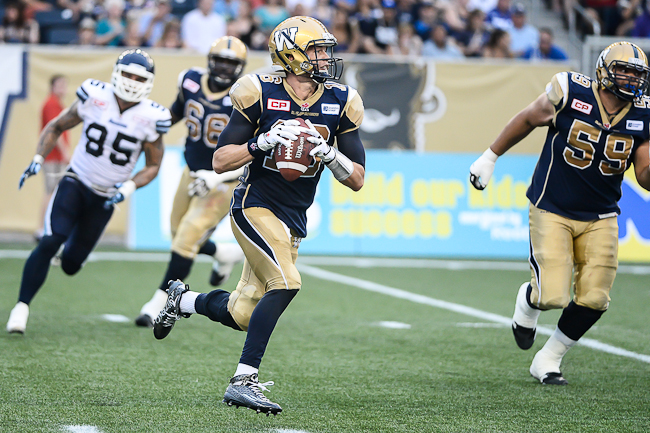 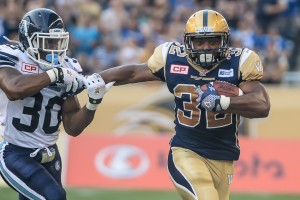 WINNIPEG — A promising start for Bombers quarterback Robert Marve was sullied by four turnovers and a critical special teams mistake, as the Toronto Argonauts beat the Winnipeg Blue Bombers 27-20 on Friday night. It’s the third straight loss for Winnipeg, as they fall to 3-5. Toronto improves to 5-2 and, for the moment, are the East Division’s top team.

The turning point came in the fourth quarter, as the Bombers special teams allowed the unforgivable with a six-point lead – a 69-yard punt return touchdown to A.J. Jefferson, which gave the Argos their first lead since the second quarter.

“Unfortunately, we had a bust on special teams and unfortunately that was the turn of the game,” said linebacker and special teams member Khalil Bass. “It took the momentum out of us and the rest is history.”

“This one’s going to sting for the bye week,” said Blue Bombers head coach Mike O’Shea. “I thought we played a pretty gritty game, for the most part, then let it out of our hands a little in the fourth quarter. There’s plays through the entire game we’ll want back, not just as players, but as coaching staff as well.”

A Rory Kohlert fumble on the Winnipeg possession following the return TD didn’t help matters, as Toronto then marched down the field, ending their drive with a Tori Gurley six-yard touchdown reception to seal the win. The Argonauts out-scored the Bombers 14-5 in the second half.

Marve was solid, not special, in his first start at quarterback for the injured Drew Willy. He had 203 yards, one touchdown, and one interception on 18-for-29 passing, adding 37 yards on the ground to almost certainly earn another start in two weeks against Calgary. Running back Cameron Marshall was impressive filling in for the injured Paris Cotton, getting 139 total yards, including a 56-yard catch and run touchdown in the first quarter.

“I thought we had it for the majority of the game, I just thought we had to come out there and finish and we didn’t finish,” said Marshall. “That’s kind of been the story of this year so far, we haven’t finished, especially the close games that we should win.”

“You’re up 9-0, you’re at home. You’re up 20-14, you’re at home. You’re just hoping to kind of pop one here, pop one there, get two scores and seal it up. We just never did that, I think we need to, as a team, be ready to clamp them down when we have them. We can’t keep playing with teams with one-score leads and the same thing happens in the last three minutes,” said Marve.

Marve’s first start was eventful off the field as well as on, admitting after the game that he suffered from a stomach virus and was throwing up in the day leading up to the game. He also injured the thumb on his throwing hand during the game, but played through it. On the plus side, oft-reliable Nick Moore made himself available early and often, leading the receiving core with 44 yards on five receptions.

Toronto, meanwhile, did a good job capitalizing on Winnipeg’s mistakes – including the four turnovers and nine Blue Bomber penalties committed on the night. Quarterback Trevor Harris put up solid numbers with 168 yards and two touchdowns on 18-for-24 passing.

The bigger story for the Argonauts, though, was running back Chad Kackert running 73 hard-earned yards on the ground, frequently bowling over players in the Bombers secondary and looking no worse for wear after two years away from the game. After suffering a gruesome ankle injury in 2013, Kackert retired and spent time as a strength and conditioning coach for Toronto. On June 21, he was re-activated as a player, and this week marks his long-awaited return.

After a bye week, the Blue Bombers return to home action against the Calgary Stampeders on Saturday, August 29th at 5 p.m.