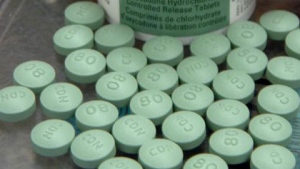 One person has died and two others went to hospital this weekend in what Winnipeg police say is a possible fentanyl overdose.

Police aren’t commenting further, saying the matters are of a private medical nature.

The exact substances taken isn’t clear, but fentanyl is one of the drugs police are considering.

“Over the past three years there has been a progressive increase in the number of illicit drug overdose deaths in which fentanyl is detected, either alone or in combination with other drugs,” police said in a release.

Officers are using the opportunity to warn the public on the dangers of fentanyl.

Early signs of a fentanyl overdose include…