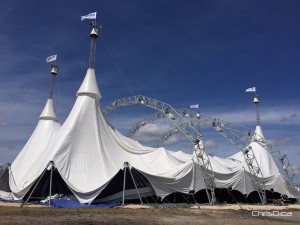 The sign, which is currently down for repairs, would be rivalled by a white “big top” tent as part of Cavalia’s Odysseo production. The largest touring tent in the world is in Winnipeg for four weeks of shows beginning September 10.

Kevin Donnelly, of True North Sports & Entertainment, didn’t exaggerate on Tuesday when he called it the largest entertainment event ever to be staged in Manitoba.

At 38 metres tall, and 6,320 square metres, the tent is a spectacle in itself, even without setting foot inside for the soon-to-open live show.

“I’ve seen the show twice, and I can tell you, that I think it’s amongst the best shows I’ve seen in my life. And I’ve seen a few shows in my life,” Donnelly said.

A second Odysseo show is currently running in Montreal, but will head west by the end of the month as a team of 80 workers convert the empty tent into the show’s village. Housed inside will be an even more impressive stage stretched to 1,626 square metres — an area larger than the ice rink at MTS Centre.

Sixty-five horses and 45 artists will carry out performances, accompanied by stone, earth and sand components. Production also includes the building of an underground drainage system to create a “lake” on the stage and release 300,000 litres of recycled water. Ground at the site was broken at the end of July and should be fully transformed by the end of the month.

Bleachers erected will accommodate 2,000 spectators for each showing, which was extended beyond its original two-week run due to high demand.

Tickets are currently on sale through Ticketmaster and Cavalia.net for between $49.50 and $129.50.

Watch a trailer for Odysseo below: