By Peter Henderson, The Canadian Press 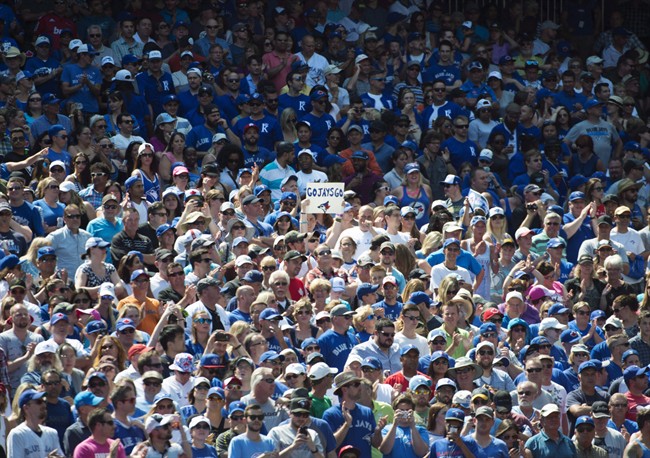 TORONTO – The Toronto Blue Jays are leading the major leagues in scoring and RBIs, yet owner Rogers Communications Inc. is probably most pleased about the ROI — the return on investment.

Languishing eight games back of the New York Yankees in their division standings, the two squads are now fighting it out for top spot in the American League East.

“You know it’s positive, but putting absolute number on it is very difficult to determine,” he said.

Rogers has numerous revenue streams from the Blue Jays, he noted, including ticket sales, concession stands and merchandise.

And as a so-called vertically integrated media conglomerate, he said there are plenty of other opportunities for Rogers to make money off the newly competitive team, whether it’s advertising opportunities on the company’s TV channels, cover photos of the Blue Jays on its magazines or Blue Jays-branded offers for its cable and wireless packages.

“That would just be the smart business thing to do,” he said. “You could get a boost across a lot of their products.”

Crandall added that the higher revenue could ease the pressure on the Blue Jays from the falling Canadian dollar because player salaries are paid in American currency.

Jason Diplock, vice-president of ticket sales and service for the Jays, said in an email that ticket sales have quadrupled since the trade deadline. The last four home games have been sell-outs, he added.

Rogers does not break out its revenue from the Blue Jays separately in its quarterly reports, instead including it in its media properties.

In the company’s most recent earnings statement — for the quarter ending June 30 — the media division accounted for $582 million of the company’s $3.4 billion in revenue.

Crandall said analysts have long been skeptical of the value of Rogers’ ownership of the Blue Jays, especially during the down years. Rogers purchased the team in 2004 and the team hasn’t made the playoffs since 1993.

“If ROI was the only thing dictating this, I think the money you could derive from selling the Blue Jays could probably be used somewhere else in a cable company,” he said.

Still, Crandall said, there is value to owning a sports team that might not be reflected in the bottom line, such as the cross-platform promotion of Rogers products, advantages in negotiating broadcast rights, the prominence of the company’s brand — and plain old pride.

“How do you put a price on the company name being up on the scoreboard?” he said. “It does look good and I’m sure it helps. I just can’t tell you how much it helps and I’m not sure they could tell you either.”

The Blue Jays are catching the attention of more than just Toronto.

Loraine Cordery, marketing and insights manager at IPG Mediabrands, said her company’s analysis of TV ratings, tweets, and other social media shows that the Blue Jays are Canada’s team when it comes to baseball.

“It’s not just a phenomenon in Ontario,” she said. “It’s very exciting to see that the whole country is getting behind the success of the Blue Jays.”

IPG’s research shows the total number of tweets per day about the Blue Jays has gone up 270 per cent since the trades. Tweets from outside Ontario have increased by 37 per cent.

In the same period, average attendance at the Rogers Centre has increased from 27,841 per game to 38,771.

Cordery said the trends have persisted even as the team has fallen two games behind the Yankees in the division.

“It’s not just people jumping on and then off the bandwagon, the buzz is still going strong,” she said.