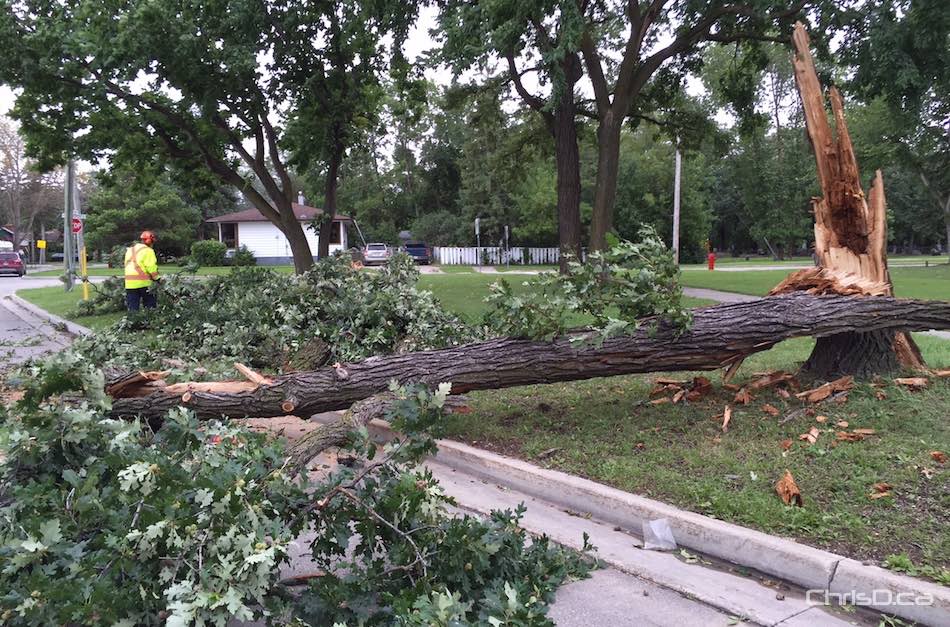 A City of Winnipeg worker clears a downed tree in St. Norbert on Sunday, August 23, 2015. (CHRISD.CA) 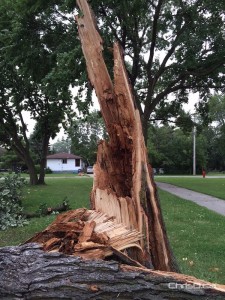 The storm knocked down dozens of trees across the city this weekend. (CHRISD.CA)

Wicked wind, rain, downed trees and cooler than normal temperatures was the story of the weekend in Winnipeg and southern Manitoba.

Thousands of residents were without power on Saturday into Sunday, as the city received more than 50 mm of rain.

The St. Vital area received 70 mm on Saturday, plus an additional 10 mm on Sunday. The rain was enough to flood parts of St. Vital Centre, with the movie theatre being forced to close early on Saturday.

The City of Winnipeg reported 133 calls for downed trees, while Manitoba Hydro said about 4,000 people were without power on Saturday. Crews were out again Sunday working to restore power to areas of Winnipeg. Wind gusts were clocked at around 90 km/h, according to Environment Canada.

The St. Norbert Farmers’ Market had to close early on Saturday as the grounds took on several inches of water. Photos from the site showed vendors pushing their merchandise through water and artisans working to get crafts to drier ground.

The weather also cancelled the second day of the MS Society’s Biking to the Viking fundraiser ride from Stonewall to Gimli. Shuttle buses were dispatched to bring riders back, as organizers feared heavy rain and debris from the storm would pose a risk to riders along the highway.